3/11 survivor: ‘Reconstruction’ has no meaning in Olympics 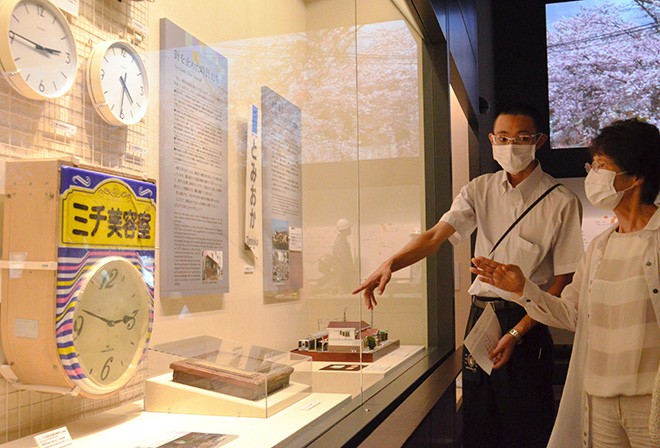 Akihiro Ono points to a clock that stopped working when the tsunami struck on March 11, 2011, at a museum in Tomioka, Fukushima Prefecture, on July 21. (Shoko Rikimaru)

Akihiro Ono was wandering around the town of Tomioka in Fukushima Prefecture when the first Olympic competition started on July 21.

The Japanese and Australian softball teams squared off at the Fukushima Azuma Baseball Stadium, about 70 kilometers from Tomioka.

The town was supposed to be bustling with Olympic-related visitors, but organizers have banned spectators from most of the venues as a precaution against the spread of COVID-19.

“I no longer want the Games’ organizers to use the word ‘reconstruction’ at the Olympics,” Ono said.

Tokyo touted the “reconstruction of the Tohoku region” from the Great East Japan Earthquake and tsunami disaster in March 2011 in its bid to host the 2020 Games.

Although wary early on about Tokyo’s motive to use “Tohoku reconstruction” as a slogan, Ono felt the Olympics could provide an opportunity to show the world the progress and continuing struggles of the area following the disaster that nearly killed him a decade ago.

With the Olympic buzz missing on July 21, Ono, a 30-year-old company employee from Iwaki in the prefecture, visited the Historical Archive Museum of Tomioka instead of watching the softball game.

At the museum, which opened on July 11, Ono saw a police car that was smashed in the tsunami, a clock that stopped working at 2:46 p.m., when the earthquake hit, and other items showing the devastation caused by the natural disasters.

Ono was a student at a technical college in Iwaki 10 years ago. He was at his home near the sea when the tsunami reached land.

He had never seen such huge waves before, and he captured the scene using a digital camera. In the video, Ono can be heard almost screaming at the tsunami as it gushed into the city.

The water reached the height of his chest, but he managed to escape, barely.

Two and a half years later, Ono was living in temporary housing in the city when Tokyo was named host of the 2020 Summer Games.

He said he could not feel as excited as others in the rest of the country, but he did have an interest in the sports extravaganza back then.

“I hope I will be able to watch sports on TV at my home by rebuilding my life by the time the Games open,” he said he thought.

Ono subsequently built a house in the same district where he had resided before the disaster. He now lives there with his mother.

But the number of residents in Tomioka remains at only 10 percent of the level before the earthquake and tsunami.

His doubts grew over why Olympic organizers were trying to showcase Tohoku’s reconstruction at the Games.

Ono had long kept his experience of the tsunami to himself because he felt ashamed for choosing to stay at his home instead of evacuating.

However, he began sharing his story about twice a month at the Iwaki 3.11 Memorial and Revitalization Museum after it opened in May last year. He shows museum visitors the 46-second video he took on March 11, 2011.

“I don’t want others to make the same mistake as I did,” he said.

So far, 25,500 people, including those from the greater Tokyo area, have visited the museum.

Prime Minister Yoshihide Suga and other officials have since said the Tokyo Olympics would be held to showcase humankind’s triumph over the novel coronavirus. If that were the case, the museum could have had even more visitors from both home and abroad, and Ono might have been able to share his experience with them.

But Japan closed its borders to foreign travelers amid the pandemic, resulting in the cancellations of events, including an exhibition booth featuring Fukushima.

When Games’ organizers decided to ban all spectators at most Olympic venues, including the Fukushima Azuma Baseball Stadium, Ono felt nothing because by that time the Olympics had nothing to do with him, he said.

After Japan defeated Australia in the game on July 21, Yamato Fujita, a member of the Japanese team, said, “I’m glad that we were able to play softball in Fukushima.”

“The attempt to showcase the ‘reconstruction’ at the Games has already failed since people from home and abroad can’t connect to the disaster-hit areas,” he said.