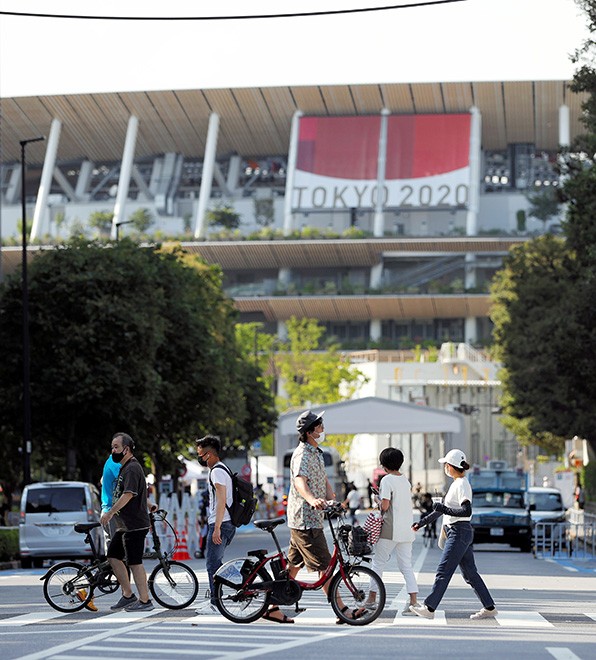 Streets near the National Stadium in Tokyo’s Shinjuku Ward are bustling on July 22, the day before it will host the Opening Ceremony for the Olympics. (Yasuhiro Sugimoto)

Tokyo confirmed 1,979 new COVID-19 cases on July 22, the first time the daily count has topped 1,900 in about six months and the fifth highest total to date, according to metropolitan government officials.

The latest figure was up 671 from a week ago and marked the 33rd consecutive day for the daily count of new infections in Tokyo to exceed that of the previous week.

The latest tally brought the daily average of new infection cases in the capital over the week through July 22 to 1,373.4, or 155.7 percent of the figure for the preceding week.

The number of new infections is expected to increase further in Tokyo and could exceed the all-time high of 2,520, logged on Jan. 7. Shigeru Omi, who heads the government’s expert panel on the COVID-19 pandemic, has recently estimated that the figure will reach nearly 3,000 in the first week of August.

The number of serious cases in the capital requiring ventilators or extracorporeal membrane oxygenation, also known as an ECMO lung bypass machine, stood at 65 as of July 22.

The figure remains low, compared to 160 on Jan. 20, apparently because of a drop in the number of new infections among elderly people, many of whom have been vaccinated against COVID-19.