VOX POPULI: The raining ‘sows’ in Europe put everyone at a loss for words 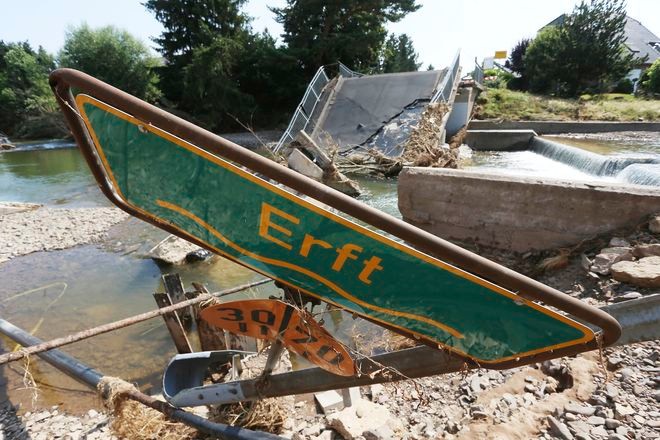 A location sign for the river Erft lies in the rubble in front of a destroyed bridge in Stotzheim, Germany, on July 22. (dpa via AP)

Like “yabai” (tricky, awesome), a slang word among Japanese youth, the German word “Sau” (sow, female pig) is being used in both positive and negative meanings.

“Saucool” (sow-cool) means something like “supercool,” whereas “Sauwetter” (sow weather) refers to “bad weather,” according to “Doitsu no Kotoba Zukan” (An illustrated book of German words) by Mana Noguchi, who works for the German Embassy in Japan.

Bad weather is also called “Hundewetter” (dog weather), which implies that even a dog would hesitate to go out in the pouring rain and other similarly foul conditions.

When it recently rained cats and dogs and “sows” of late, however, the damage rendered everybody at a loss for words. The great floods killed more than 200 people in Germany and Belgium.

“The German language hardly knows any words for the devastation,” German Chancellor Angela Merkel said after visiting one of the disaster areas.

Two months’ worth of rain fell in just two days on the watershed of a Rhine tributary, where the deluge destroyed bridges and engulfed houses.

There have been discussions in Germany on how the floods could be related to climate change, which will emerge as an issue of contention in the federal election in September.

Much of the focus is on how many additional seats the Green Party will win in the Bundestag.

More and more often, our eyes have been riveted on extreme weather conditions taking place in different parts of the world.

This summer, a subway train was submerged in a flood in China, with passengers neck-deep in water. Other parts of the globe, by contrast, experienced unprecedented heat, including 49 degrees in western Canada and 38 degrees in northern Siberia, a place known for its extremely cold winters.

“Kalter Kaffee” (cold coffee) is German for “old hat” and can refer to such common wisdom as carbon dioxide emissions must be cut to curb global warming.

Weather continues to wreak havoc, as if to test humans, who are ever so slow to put that obvious knowledge into practice.