EDITORIAL: Gloom and doom in air as Opening Ceremony kicks off Tokyo Games 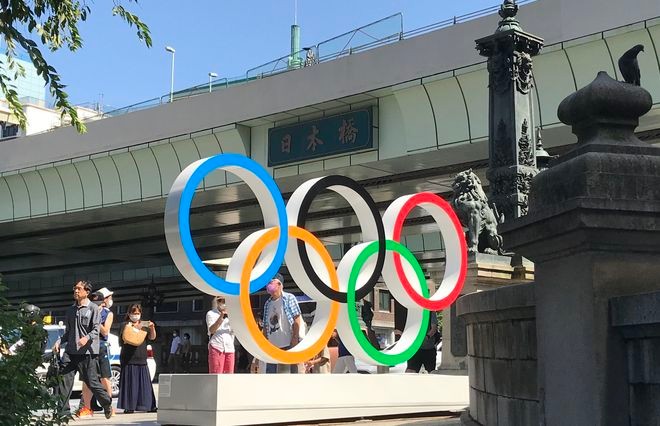 The day of the Opening Ceremony for the Tokyo Olympics arrived on July 23 while the global sporting event is being plagued by anxiety, doubt and stress.

This is supposed to be a time of excitement and enthusiasm with people looking forward to watching the amazing performances of top athletes who have trained so long and so hard for the competitions.

In addition to the COVID-19 pandemic, however, another scandal involving an Olympic creator hit the Games on the day before the opening ceremony.

The director of the Olympic Opening and Closing ceremonies was dismissed on July 22 over past jokes about Holocaust victims several days after a composer quit the team creating the ceremony over the revelation that he bullied classmates with disabilities at school.

There is no sense of euphoria or festive mood in the capital.

Many people must be simply wishing that the event will end without suffering any serious problems.

Asahi Shimbun editorials have repeatedly challenged the government and Olympic organizers to give a good rationale for forging ahead with the Olympics amid the global public health crisis.

But they have offered nothing but empty rhetoric. It is hardly surprising that the people are not showing strong support or expectations for the Summer Games.

This is an unusual and bizarre Olympics, kicking off amid division and distrust.

UNDERMINED BY A LACK OF IDEALS AND EXPLANATIONS

Huge events like the Olympics are inevitably accompanied by disagreements and controversies. To operate them successfully, organizers need to tackle issues and questions head-on through meaningful debate to build a broad consensus within society as they move from one stage to the next.

But this process has not been followed for the Tokyo Olympics.

After the failed bid to host the 2016 Summer Games, the Japanese government used a narrative of Japan’s recovery from the massive 2011 earthquake and tsunami for its campaign to host the 2020 Olympics.

Then Prime Minister Shinzo Abe falsely declared that the situation of the Fukushima nuclear disaster was “under control” as he sought international support for Tokyo 2020.

Tokyo’s successful bid to host the Games was followed by a series of problems and scandals that seriously damaged the reputation of the organizers, including the collapse of the “Compact Olympics” blueprint, ballooning costs, revelations of alleged bribery related to the campaign and frequent replacement of top officials.

The reckless, go-getting culture driving the planning and organization of the Tokyo Olympics, marked by a lack of ideals and explanations as well as disregard for inconvenient facts, has remained unchanged even after the outbreak of the pandemic and become even more pronounced.

Last spring, after the decision to postpone the Games by a year was made, Abe promised to hold the event “under the best conditions” and “in a complete form.”

Even though it was clearly a fantasy, Abe’s successor, Prime Minister Yoshihide Suga, has carried on his former boss’ approach and failed to change plans according to the new reality. The Suga administration has forged ahead with the plan to hold the event in cavalier disregard for science and public anxiety.

Suga has never shown a willingness to work with the public to develop realistic and reasonable plans for the Games by presenting to the people all possible options under the current situation along with the advantages and disadvantages while disclosing all relevant information.

The arrogant assumption that anything goes for the sake of the Olympics and unfounded optimism among organizers have resulted in a beleaguered Olympics held without spectators under a COVID-19 state of emergency.

TOP PRIORITY SHOULD BE PREVENTING INFECTIONS

The past 16 months offered a great opportunity to explore a new future for the Olympics, which has lost its original spirit as it has swollen in size and become infected with blatant commercialism. Many members of the organizing committee were ready to take on the challenge.

But specific attempts to make changes for the future were thwarted by conflicting interests of stakeholders and, above all, by the intentions of the International Olympic Committee and U.S. TV stations and other leading sponsors. As a result, few concrete efforts to carve out a new future for the event have been made.

The process leading to the current situation has also highlighted the IOC’s self-righteous mindset. IOC President Thomas Bach asked Suga to let spectators attend Olympic events if the COVID-19 situation improves in the capital, challenging Japan’s painful decision to bar spectators from most Olympic venues, made after a string of blunders and missteps.

Bach also drew much criticism from the Japanese public by saying, "We are also confident that once the Japanese people will see the athletes performing in these Olympic Games and hopefully even successfully” their attitude will become less negative.

The Olympics will go adrift with no city willing to host the event in the not-so-distant future unless the IOC pays serious attention to the voices of citizens and shows more sympathy for their feelings.

Needless to say, organizers should continue all-out efforts to prevent infections. Besides preventing athletes and Olympic officials coming from abroad from spreading the coronavirus here, it is also vital to ensure that they will not bring the coronavirus they may catch in Japan back home.

In Tokyo, new COVID-19 cases are surging again, raising concerns about the possibility that the city’s health care system may become overwhelmed by patients.

Organizers need to put the top priority on protecting the lives and health of people regardless of their nationalities and other factors and keep making every possible effort to achieve the goal without ruling out the possibility of canceling or suspending events.

JAPAN SHOULD CHEER FOR ALL PARTICIPANTS EQUALLY

Besides the pandemic, the world is being plagued by serious problems including conflict, terrorism and poverty. The Refugee Olympic Team has been formed again for the Summer Games.

We should wish for the best possible performances for these athletes who have overcome many hurdles to take part in the Games despite the controversy over the wisdom of holding the event.

We naturally tend to focus our attention on the Japanese athletes. But many of the foreign participants are forced to compete under harsh conditions as they are subject to various COVID-19 restrictions that inevitably hamper their training and preparations for their competitions.

We should breathe fresh air into the Olympics, which tends to stir up nationalistic sentiment, by cheering equally for all the contestants.

At the beginning of the first soccer games, held before the Opening Ceremony, players took a knee in a united protest against racism. The ratio of female athletes taking part in the Games is higher than ever, nearly reaching gender parity, with men and women competing together in many events.

Watching Olympic events will inspire us to reflect on such issues as war and peace, the need to eliminate discrimination, gender equality and Japan’s low levels of awareness of human rights, a problem that has been hammered home to us by a flurry of scandals.

The Olympics also offers a great opportunity for people all over the world who will watch the athletic spectacle to recognize the power of sports and the potential of humans while renewing their determination to work together to build a better future for the world.

Each of us can and should use our own unique perspective as individual citizens to benefit from what the Olympics can offer, which organizers have failed to demonstrate in any specific way.