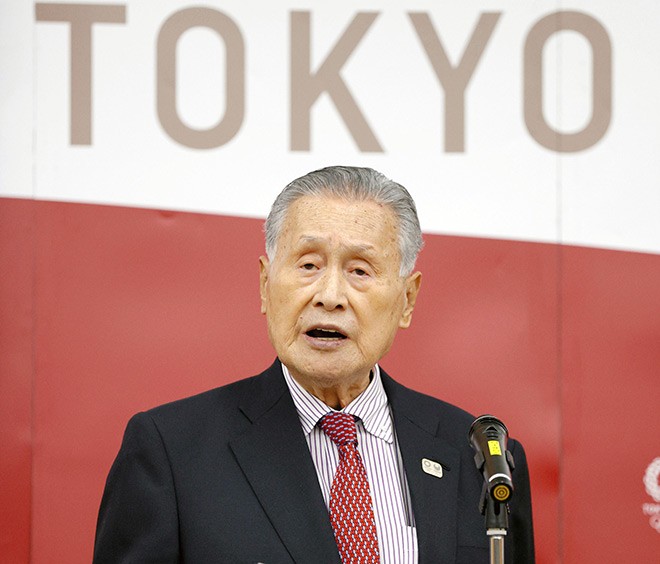 Yoshiro Mori, a former prime minister, was forced to resign as chief of the Tokyo Olympic organizing committee over his sexist comments. (Asahi Shimbun file photo)

After losing a number of Olympic-related personnel because of their offensive comments and behavior, the Tokyo Games organizing committee plans to replenish the lineup with … Yoshiro Mori.

Several sources said moves are under way to name Mori, who resigned as president of the committee after making derogatory comments about women, an honorary supreme adviser.

Cooler heads in the Suga administration have expressed strong opposition to the plan, given the huge international uproar that Mori caused in February when he said female members of sports councils prolong meetings because women talk too much.

Sources with the organizing committee and government said the council wants to acknowledge the role that Mori, a former prime minister, played before he was forced to step down, including his work in bringing the Olympics to Tokyo.

As honorary supreme adviser, Mori would be asked to meet with foreign dignitaries in Tokyo for the Olympics.

Currently, Shinzo Abe, another former prime minister, is the only honorary supreme adviser for the organizing committee. Abe does not plan to attend the Opening Ceremony later on July 23. But Mori is expected to be in attendance.

Mori served as organizing committee chief from 2014 until the uproar in February.

Despite his resignation, Mori attended the welcoming reception at the State Guest House for Thomas Bach, president of the International Olympic Committee, on July 18 along with Prime Minister Yoshihide Suga and Tokyo Governor Yuriko Koike.

After Mori stepped down, a string of other figures involved in the Olympic festivities also resigned or were dismissed for their past actions, including body shaming, bullying disabled children and making jokes about the Holocaust.