Staff, athletes in constant fear of infections at Olympic Village 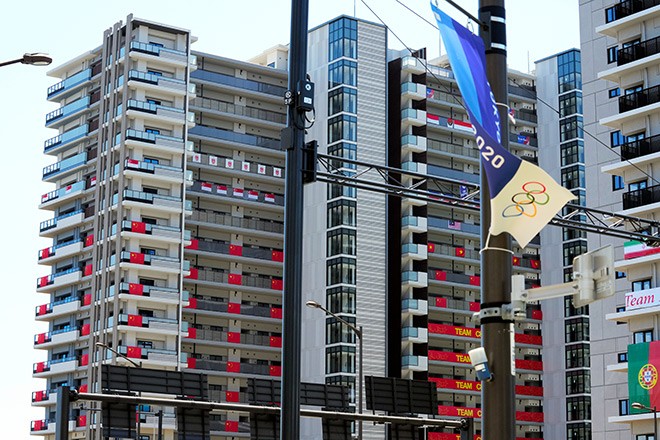 Flags are flying at the Olympic Village in Tokyo’s Harumi district on July 22. (Ryo Kato)

Many guests refuse to sanitize their hands at the entrance to the often-crowded spacious venue. One-use gloves and masks appear optional. And bare hands touch food that other people may eat.

This is not the scene at a restaurant defying government requests to take anti-coronavirus measures, but the description from a staff worker at the Olympic Village in Tokyo.

The part-time worker in her 50s says she is in constant fear of a COVID-19 cluster because of inadequate infection control practices, especially at the dining halls.

“It could happen at any moment,” she said.

Her main concern is a central building where athletes gather to dine.

The two-floor dining halls can seat about 3,000 people. Up to 45,000 buffet-style meals are served daily.

The halls, open 24 hours, are especially congested during the peak breakfast time period, when 70 to 80 percent of the seats are filled.

Staff hand single-use gloves to athletes and related officials when they enter the dining halls to prevent the virus from spreading.

But “a significant percentage” of athletes and officials refuse the protective handwear, saying, “I don’t need them,” the woman said.

Some of them do not even disinfect their hands with the alcohol made available at the entrance, she said.

Food stations are set up in the middle of each floor.

Around 700 kinds of dishes and ingredients, including vegan and halal foods, are made available. Dining hall staff serve them upon request.

But fruits are set aside for “help yourself.”

Diners often finish their meal and head to the fruit station to grab some dessert. But they rarely wear gloves when they do so.

The woman has seen gloveless diners pick up fruit and then put it back in the stand.

Many guests enter the dining halls wearing masks. But after eating, some do not put their masks back on while talking to others sitting nearby. Some groups have turned aside the acrylic panels installed to block droplets.

The woman says she cringes every time a maskless athlete or official approaches her and asks, “Where is the bathroom?” or “Can I take some food back to my room?”

During a night shift, she heard through an open window a ruckus made by guests in their rooms. She wondered if they were drinking alcohol.

Some of her co-workers have told her that family members want them to “stop working in the Olympic Village,” she said.

The woman received her first vaccine shot in early July as part of her employer’s workplace inoculation program.

But she has yet to receive information about when she can take a polymerase chain reaction (PCR) test, which is mandatory for all athletes, officials, staff and media members who come in and out of the Olympic Village.

The first COVID-19 case in the village was confirmed on July 17, just four days after it officially opened.

The woman said she was then told that all staff would have to take a PCR test. But no information has been provided about testing, she said.

Some Japanese athletes staying in the village have voiced similar concerns about the conditions.

“If I contract the virus, I won’t be able to compete in the Olympics,” a Japanese Olympian said. “So I stay in my room except for eating.”

“It’s like a buffet. So many people are there all the time. It’s impossible to prevent an infection any way you slice it,” the athlete said.