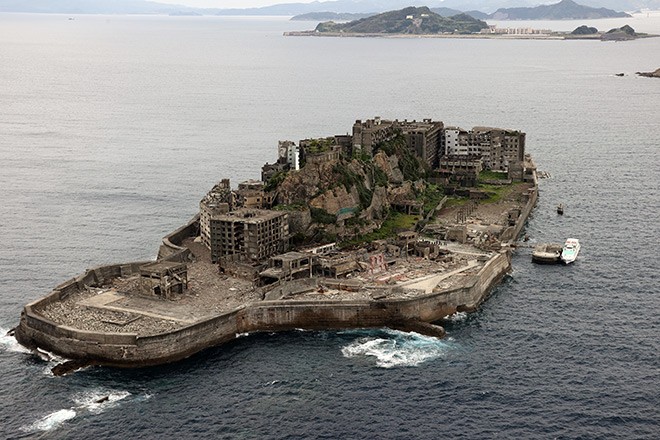 Hashima island, also known as 'battleship island,' is where the Hashima Coal Mine, a component of a World Heritage site, is located. (Asahi Shimbun file photo)

The UNESCO World Heritage Committee has expressed strong concerns that the Japanese government is not doing enough to disclose the negative aspects of a World Heritage site where Koreans were forced to work.

The committee passed a unanimous resolution on July 22 criticizing the inadequate explanation about workers brought from the Korean Peninsula to work at the Hashima Coal Mine on a tiny island off the coast of Nagasaki city.

The coal mine, located on what is known as “Battleship Island,” is part of the “Sites of the Meiji Industrial Revolution,” which was designated a UNESCO World Heritage site in 2015.

Prior to the designation the government pledged to implement measures to record that workers were brought to the coal mine from the Korean Peninsula.

The latest vote came in response to a report compiled in June by the World Heritage Center, which dispatched experts to the Industrial Heritage Information Center in Tokyo’s Shinjuku Ward. The center displays the various components of the heritage site.

The report released in July by the experts said center officials had failed to display diverse testimony that would allow visitors to make a judgment about the more negative aspects of the site and that the explanation about those victimized was “insufficient.”

Despite the unanimous resolution, the government is not expected to change its stance that it has carried out its promise made in 2015 to properly disclose the negative aspects.

At a July 21 news conference, Chief Cabinet Secretary Katsunobu Kato said, “We have always accepted in a very serious manner the resolutions and recommendations issued by the World Heritage Committee and have implemented in a sincere manner the promised measures.”

The report by the World Heritage Center pointed out that the displays about Hashima Coal Mine give the impression that the workers were not forcibly brought there. It concluded that there was no display that reported what the victims had to endure.

The resolution by the World Heritage Committee called on the Japanese government to begin considering what measures it plans to maintain the memory of the workers at the coal mine. One suggestion was the establishment of a new information center that focused exclusively on explaining what the victims experienced.

The resolution once again called on the government to consider measures to express that many of the workers were forcibly brought to the coal mine from the Korean Peninsula and made to work under harsh conditions.

The resolution called on the government to submit a report by Dec. 1, 2022, to explain what it intends to do.

The World Heritage Committee is made up of 21 member nations representing all parties to the World Heritage Convention, but Japan is not one of them this time around. It is only participating in the committee session as an observer.

(This article was written by Sawaaki Hikita in Paris and Amane Sugawara in Tokyo.)