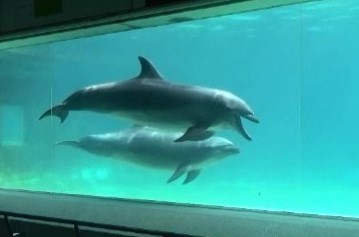 A bottlenose dolphin yawns at the Minamichita Beachland Aquarium in Aichi Prefecture. (Provided by Akiko Enokizu)

Even dolphins, playful and curious though they are, can get bored with life in an aquatic environment and apparently need to yawn to stay awake.

Video footage captured a dolphin yawning underwater, the first confirmed case of such behavior among whales, orcas and other aquatic mammals.

Researchers at Mie University said the finding indicates yawning is possible underwater without taking air in, despite the conventional definition that the behavior entails breathing.

The researchers say a new definition of yawning should be in the offing.

“I want to examine whether killer whales, manatees and other creatures also yawn in water,” said Akiko Enokizu, a member of the team who is in the third year of her Ph.D. course. “I want to figure out why animals need to gape.”

Enokizu, who is writing a doctoral thesis about yawning in mammals, monitored the activities of three bottlenose dolphins housed at the Minamichita Beachland Aquarium in Aichi Prefecture for 14 days.

She noted that they slowly opened and closed mouths on five occasions. The footage showed them swimming in a relaxed manner with their eyes half closed. Enokizu concluded this behavioral pattern constitutes underwater yawning.

While dolphins do surface to breathe, their gaping--whether underwater or on the surface--had never been confirmed before.

In addition to humans, monkeys, birds, newts, frogs and many other vertebrates are known to yawn when they feel sleepy. This behavior is thought to send oxygen to the brain, prompting the creature to temporarily become awake and alert.

Yawning is defined in ethology as “an involuntary action that begins with a slow opening of the mouth with inhalation, followed by a maximum gaping phase, and ends with a short exhalation and the closing of the mouth.”

Since gaping in water is not associated with breathing, it does not fit the conventional definition.

“The act of just opening the mouth wide might help them stay awake,” said Tadamichi Morisaka, an associate professor of ethology who is part of the research team. He referred to another finding that showed dolphins are prone to be active for a while after they yawn.