Tokyoites look to the skies to celebrate start of Olympic Games 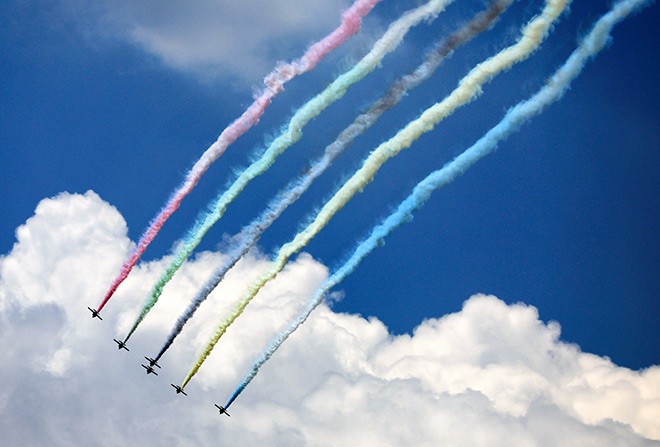 Banned from the Opening Ceremony and living under another COVID-19 state of emergency, Tokyoites found a way to celebrate the start of the Olympics and temporarily forget the hardships and embarrassments associated with the event.

Crowds formed in parts of Tokyo to watch Blue Impulse, the Air Self-Defense Force’s aerobatics team, fly over landmarks in the capital, including the metropolitan government’s building, Tokyo Tower, JR Tokyo Station and Tokyo Skytree, to mark the opening of the Summer Games.

A square in front of Tokyo Station was packed with people holding smartphones and single-lens cameras directed toward the sky.

Around 12:40 p.m., the spectators yelled in jubilation and applauded as the six fighter jets passed over the station in formation.

About 20 minutes earlier, the Blue Impulse team departed the ASDF’s Iruma Air Base in Saitama Prefecture.

After Tokyo Station, Blue Impulse headed to the National Stadium, the main venue for the Games, and used five different colors of smoke to skywrite the Olympic rings.

“This is my second Olympics,” a 75-year-old woman at the Tokyo Station square said, while looking at the sky. She said she watched the 1964 Tokyo Olympics on television.

“It is worth having lived so long to (see another Tokyo Olympics.) I want to relish and enjoy the Games,” she said.

Her 44-year-daughter and 10-year granddaughter who live in Mito, Ibaraki Prefecture, accompanied her to see the aerobatics.

For the daughter, the aerial show was a welcome break from the scandals and safety concerns in the runup to the Games.

The number of new COVID-19 cases keeps rising in Tokyo, where anti-Olympic protests have continued. Olympic softball and soccer games have already been held but mainly to empty stadiums because of the no-spectator policy adopted to prevent the virus from spreading.

And a string of high-profile people involved in the Olympic festivities have been forced to resign over offensive remarks.

“I was completely turned off by the mess,” the daughter said. “But seeing so many people together here, I feel this is real, and it is charged up like a festival.”

An Olympic caldron installed on a boardwalk in the Ariake district drew a crowd of people hoping to capture the aerobatics, too.

“I could see it well. It was beautiful,” said an 11-year-old boy who lives in Ichikawa, Chiba Prefecture.

His father, 39, said he was initially skeptical about the Olympics and thought the Games should be canceled.

“But if they do it, I hope it ends without incident,” he said.

In front of the National Stadium, long lines formed from early in the morning to pose for pictures with an Olympic ring monument.

Many of the picture-takers stayed in the area, sitting on lawns nearby, and waited for the arrival of Blue Impulse.

A married couple in their 30s came to take pictures and make memories. They said they were stunned to see the crowd.

They said they “feel there’s the gap between what the news media reports, such as spectator bans and a self-restraint mood, and what (we see here).”

“People are everywhere here and are getting into the spirit,” they said smiling.

A woman who lives near the stadium said the neighborhood has changed drastically since the last time Tokyo hosted the Olympics.

“I have mixed emotions,” she said. “But I am glad that we could safely have this day. I know the athletes have worked hard the entire time, so I want to cheer them on as a Japanese.”

The woman watched track and field competitions in person in the 1964 Games. But that opportunity will not come for her nor any other ordinary resident for these Olympics.

The 2020 Olympics were supposed to have given Tokyo the opportunity to showcase its many charms to an international audience and to successfully host the world’s biggest party.

But the fences and security personnel surrounding the National Stadium on July 23 were reminders that even the Japanese public is not invited to the show.

Shortly before the aerobatics, the 121-day Olympic torch relay reached the finish line at the metropolitan government building in Shinjuku Ward.

According to the Tokyo 2020 organizing committee, 10,515 torchbearers participated in the relay that kicked off in March in Fukushima Prefecture and toured all 47 prefectures.

Nakamura Kankuro VI, a kabuki actor who played the leading role in a drama about people who brought the 1964 Olympics to Tokyo, was the final runner.

He lit the Olympic torch plate, which will be transported to the National Stadium for the Opening Ceremony.

“Athletes’ dreams and efforts are connected to the 2020 Tokyo Games,” Tokyo Governor Yuriko Koike said in a speech. “I hope this Olympics will be an amazing one.”

The organizers initially planned to re-enact the 1964 Olympic torch relay, in which, according to old news reports, employees stopped working and stuck their heads out of the windows of their office buildings to cheer as the Olympic flame passed by.

Back then, strict traffic controls were enforced because crowds were packing the streets of central Tokyo with no room to move.

None of that happened this time because of the pandemic.

In 20 prefectures, including Tokyo, portions of the relay on public roads were canceled or rerouted because of surges in infections in the areas.

The usual crowds of people waving and cheering the runners were noticeably absent on some legs of the relay.

“I am very much frustrated, and so are the torch bearers,” a top official involved with the torch relay preparations said. “Now, I just want the Olympics to be done and dusted.”