Mass exodus from Tokyo starts on eve of Olympic opener 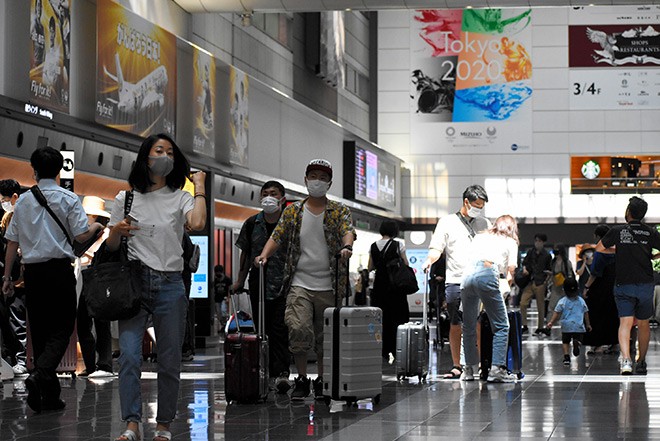 Passengers head to their flights at the domestic terminal of Tokyo's Haneda Airport. (Takashi Ogawa)

With no spectators allowed at most of the Tokyo Olympics, planes were nearly full and roads heading out of the capital were packed as a mass exodus began on July 22, the start of a four-day weekend.

The extended weekend was initially intended to keep company employees away from central Tokyo around the time of the Opening Ceremony for the Tokyo Olympics.

Instead, many people took advantage of the chance to flee to other parts of the nation while Tokyo is under a state of emergency amid the novel coronavirus pandemic.

Tokyo’s Haneda Airport was bustling from the morning of July 22 as passengers prepared to board flights out of the capital.

One 19-year-old university student said he wanted to leave Tokyo and return to his hometown before the Olympics began.

“There has been an increase in COVID-19 cases and many foreigners are coming to Japan,” he said. “I wanted to avoid the greater Tokyo metropolitan area as much as possible.”

A 34-year-old female company employee also wanted to leave Tokyo because she resides near the Olympic Village in the Harumi district.

“I wanted to get away from a noisy Tokyo,” she said.

A 38-year-old company employee was flying to Hokkaido where he grew up. He planned to watch the Opening Ceremony on TV because “since there will be no spectators, it doesn’t matter if we take in the event from our travel destination.”

About 80 percent of Japan Airlines’ flight out of Haneda on July 22 were booked, while for All Nippon Airways, about 95 percent of morning flights had been reserved.

The outbound expressways from Tokyo were also backed up with traffic as drivers fled the capital area.

The governors of Tokyo and its three neighboring prefectures issued a joint statement on July 21 calling on local residents to avoid crossing prefectural boundaries as much as possible.

But some areas in the greater Tokyo metropolitan area attracted large crowds on July 22.

Tobu Zoo in Shiraoka, Saitama Prefecture, operates a “Super Pool” only during summer that was filled with families on July 22.

One woman in her 30s who arrived with three family members said, “We came here because it’s hot outside and we wanted to go somewhere close. We want to have fun while being cautious about not getting infected.”

In western Japan, Tokyo residents could be found enjoying themselves far from the Olympics.

A 25-year-old graduate student living in Kanagawa Prefecture traveled to Osaka to visit a friend.

“I thought about coming to Osaka because I felt the Tokyo area would be crowded with those interested in the Olympics,” the woman said.

She said she would always wear a mask and not make much of a commotion.

The beach at Shirahama, Wakayama Prefecture, south of Osaka, was packed.

One hotel operator said its rooms were almost fully booked by visitors from the Kansai region for the four-day weekend.

One visitor said it was the first time for a trip in a year.

Hakata Station in Fukuoka city, considered the gateway to the main southern island of Kyushu, was busy with travelers on July 22.

A 66-year-old company employee living in Sendai said he had come to travel around Kyushu.

He said government officials were sending mixed messages in asking residents to refrain from outings during the extended weekend even while the Olympics are going ahead.

A 36-year-old nurse working in Hiroshima had returned to her family home in Fukuoka Prefecture.

“I am still wondering why the Olympics are being held when it appears another infection explosion could occur at any time,” she said. “It would have been better for the athletes to hold the Games when it would have been possible to allow spectators in.”