VOX POPULI: Olympics now under way, but we can still keep asking why 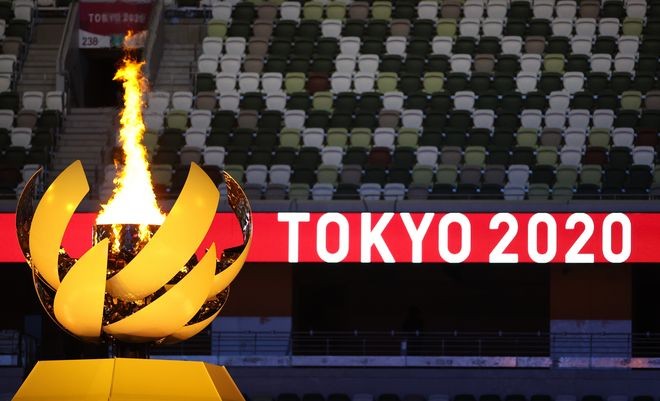 The Olympic fire burns in front of empty seats at the Opening Ceremony in Tokyo's National Stadium on July 23. (Toshiyuki Hayashi)

Just like on the opening day of the 1964 Tokyo Olympics 57 years ago, fair weather prevailed in the Japanese capital yesterday.

People formed a long line outside the National Stadium so they could pose for snapshots in front of an Olympic five-ring monument.

But an imposing fence kept them out of the stadium.

As if to symbolize the divide the 2020 Tokyo Olympics has created between the public and athletes, the barrier stood more than twice the height of the average person.

Even though the Games are being held in Japan, fans are not allowed direct access. Numerous exchange programs between visiting athletes and local residents had to be canceled.

All sorts of improbable assumptions were made, only to prove untenable.

For instance, Japan was "supposed to" overcome the novel coronavirus pandemic in one year, and vaccinations were meant to enable fans to attend the events.

And the supposed efficacy of the "bubble system" of keeping visitors separated from the public has now become highly doubtful.

As infections continued to surge, public opinion grew overwhelmingly in favor of re-postponing or cancelling the Olympics. But neither the Japanese government nor the International Olympic Committee took heed.

And perhaps under the yoke of slavery to TV money, so to speak, one IOC official noted to the effect that only Armageddon would stop the Games.

Solidarity, one of the Olympic ideals, has become nothing more than an empty slogan.

Perhaps it is a mistake to perceive the Olympics as a social movement of sorts that advocates peace and condemns discrimination.

What has emerged clearly is the "face" of the Olympics as a mammoth athletic show business event.

I wonder if the most significant legacy of the Tokyo Olympics will turn out to be a decisive change in our collective view of the nature of the Olympics.

Of course, even if the Olympics are just a show, we can still be enthralled and deeply moved to see flesh-and-blood athletes challenging the limits of their prowess and endurance.

At the same time, however, I would still like to continue asking if this sporting extravaganza, being held in a borrowed site that is Tokyo, was really necessary.