Emperor in bind over use of ‘celebrate’ for Tokyo Olympiad 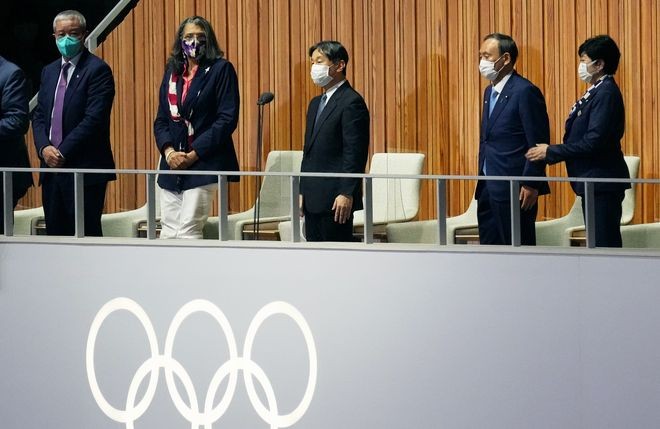 Emperor Naruhito was caught in a conundrum when it came to wording in his speech in Japanese to declare the 2020 Tokyo Olympics open during the July 23 Opening Ceremony at the National Stadium.

The only other occasion for a summer Olympics to be held in Tokyo was 57 years ago in 1964 when Naruhito's grandfather, Emperor Showa, presided over the ceremony.

Naruhito had only that precedent to follow, but he was bothered by the use of the word “celebrating” in light of the current health crisis.

Under the Olympic Charter, the head of state of the host nation declares the Games open and wording in French and English is included in the charter outlining what should be said.

The official English version for the Tokyo Olympics was: “I declare open the Games of Tokyo celebrating the 32nd Olympiad of the modern era.”

In 1964, the Japanese Olympic Committee translated the declaration into Japanese for Hirohito, posthumously known as Emperor Showa, and he used “iwai” for celebrating to announce the Games were officially open.

But Naruhito was said to have been concerned about whether holding the Olympics during the pandemic would trigger a further spread of infections.

According to sources, concerns were raised within the Imperial Household Agency that if Naruhito followed his grandfather and also used “iwai” that might give the impression that he was giving his blessing to holding the Tokyo Olympics at such a critical juncture.

Following discussions among central government officials and the Tokyo Olympic organizing committee, it was decided to allow Naruhito to use “kinensuru” for celebrating. The term has more of a nuance of marking or commemorating an important occasion.

Sources said the International Olympic Committee raised no objections when they were informed about the new wording as an alternative translation for celebrating.