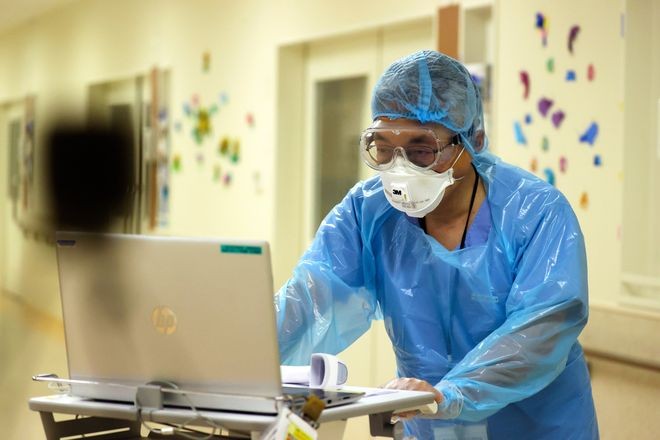 Masaya Takahashi, the head of Tachikawa Sogo Hospital, looks over the medical records of a COVID-19 patient on July 23. (Naoko Kawamura)

Around 8 p.m. on July 23, as the Opening Ceremony for the Tokyo Olympics was getting under way, a hospital in the capital's western Tachikawa district began moving a COVID-19 patient with critical symptoms to its high care unit (HCU).

It seemed fitting that the Tachikawa Sogo Hospital chose that time of the evening to do so as it had long expressed its opposition to holding the sports extravaganza while Japan remains in the grip of the novel coronavirus pandemic.

“When working in the hospital, the Olympics appear to be happening in another world,” said hospital chief Masaya Takahashi.

The hospital set aside 20 HCUs exclusively for COVID-19 patients, but by July 23 it said 15 of them were already filled.

There was one day this week when four patients were moved to the units.

Takahashi, 58, noted that the pace of new infections had already surpassed the third wave that hit late last year.

Tachikawa Sogo Hospital was forced to cut back on beds for general patients by about 20 percent to set up the special units and move hospital personnel to care for COVID-19 patients.

But with the blazing heat of summer now in full swing, more people are turning up complaining of heatstroke and other heat-related problems. From July 21, the hospital has had to turn away many emergency cases that required hospitalization.

From late April, the hospital posted signs on its windows saying, “Medical capacity has reached its limits. Stop the Olympics!”

But that plea went unheeded, and while the Olympics went ahead with no spectators, there is much public anguish at the government's failure to come up with convincing measures to curb the surge of new infections.

Takahashi, even now, is calling for the Olympics to be canceled so COVID-19 patients do not end up dying at home because of a lack of hospital beds to care for them.

“While the Olympics are being held, the general public and Tokyo residents will forget to turn their attention toward the medical care situation, and I am worried that the restraints on their activities will also be loosened,” Takahashi said.