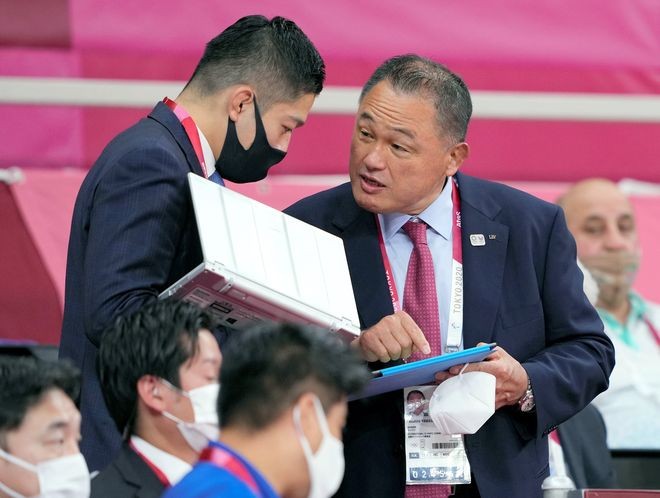 Japanese Olympic Committee President Yasuhiro Yamashita, without the face mask, talks to an official at the judo competition at Nippon Budokan on July 24. (Ryo Kato)

Yasuhiro Yamashita, the president of the Japanese Olympic Committee, flouted the Olympic COVID-19 playbook for appropriate behavior at the Tokyo Games by not wearing a face mask while talking with officials at the judo competition on July 24.

The playbook requires all Olympic athletes and officials to wear face masks to prevent a spread of infections. Contact with others is supposed to be kept to a minimum and physical contact, such as hugs and handshakes, avoided at all costs.

But on the first day of judo competition at Nippon Budokan, Yamashita, himself a judo gold medalist, was spotted talking to officials while not covered up. He was also seen hugging visiting dignitaries and talking with others while placing his arm on their shoulders.

Yamashita also heads the All Japan Judo Federation, which had an infection cluster of COVID-19 last year.

A number of athletes who took part in the Opening Ceremony on July 23 at the National Stadium were found to be milling around after their entry parade and talking with others while not wearing face masks.

An official with the Tokyo Olympic organizing committee reminded all athletes that the infection-prevention rules must be followed until the Games end next month.