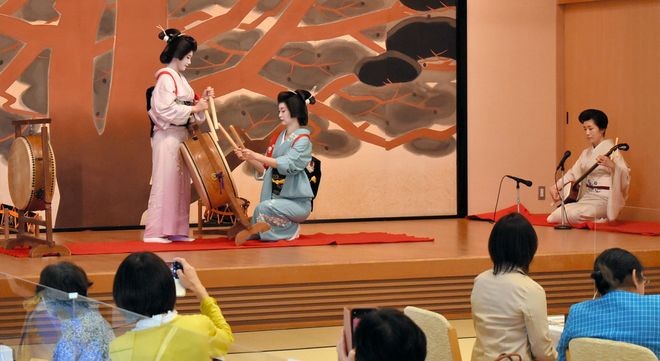 KANAZAWA--Discount geisha shows, held in the daytime, no less, unthinkable in pre-pandemic days, are catching on here, with both the performers and their fans welcoming the unusual format of the return to the stage.

Kinjoro, a long-established upscale "ryotei" Japanese-style restaurant in the city's Hashibacho district, began offering the daytime performances after most of the night parties held by geisha, known as "geigi" here, were canceled due to the COVID-19 pandemic.

The well-received effort is aimed at protecting the tradition and culture of ryotei and geisha by encouraging locals, deprived by the pandemic of being able to patronize places as they wish, to visit the city's "kagai" entertainment districts and enjoy performances for reasonable prices.

At around noon on June 20, three geisha from the Higashi teahouse district appeared onstage at Kinjoro. They performed exquisite dances and an "ozashiki daiko" drum act unique to Kanazawa-based geisha for about 30 audience members.

Though the banquet room can accommodate 90 people, capacity was cut to one-third and acrylic partitions installed at tables to prevent infections.

Kinjoro, founded in 1890, started hosting the geisha show in April, its first time ever to have geisha perform for daytime diners.

Geisha from the Higashi, Nishi and Kazuemachi teahouse districts take turns performing at Kinjoro, where they also take photos with customers and socialize with them.

After demand for large parties dried up in the spring last year, Kinjoro, which also serves as a ryokan inn, has mostly been operating to serve meals to individual customers and receive overnight guests, said Hyoe Tsuchiya, 46, its fifth-generation proprietor.

But Tsuchiya came up with the idea of holding daytime geisha performances after getting inspired by events hosted by teahouses and comments he received from his customers.

"It's more important to attract customers who have never seen geisha performances or visited ryotei to experience this culture than to make sales and profits," he said, adding that doing so was also "intended to keep ties with existing customers."

"We're truly thankful for the opportunity not only to give performances but also to socialize with customers in this difficult time when there are no parties to attend to," added Masami, who owns the teahouse Hachishige in the Higashi teahouse district.

Kinjoro plans to host the event three times or so each month.