Uchimura rules out quitting despite exit on first day 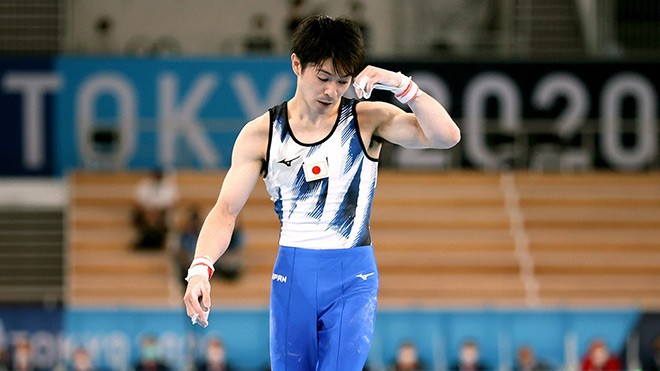 Two-time Olympic all-around champion Kohei Uchimura’s bid for glory came to an abrupt end July 24 when he fell from the horizontal bar about 30 seconds into his performance, quashing his chances of qualifying for the final.

But his path toward another gold during his fourth Olympics, this time held in his home country, is now dashed.

His hand slipped during a pirouette sequence, causing him to fall to the mat.

“It is like what are you doing?” Uchimura, 32, said after the performance.

“I am disappointed with myself,” he said. “I am no longer capable of bringing out the best of all that I have practiced.”

If his abrupt departure broke his spirit, he showed no sign, speaking with reporters afterward with smiles.

“I failed in a sequence where I have never failed before,” he said. “There still are things that I cannot become certain of after training all those years. That's what makes this sport interesting.”

He became fixated on gymnastics as he toiled to become more proficient and continued to give performances he had been unable to achieve before.

Uchimura said he was most thrilled when, as a boy, he finally managed to mount a bar with a kick.

“I was a first-grader at the time and I was the only one who could not do it in my class,” he recalled. “I ran to my classmates in the gym when I was finally able to do it.”

Even winning Team Japan's gold in Rio did not bring him the joy he felt when he was able to do that first kick.

Uchimura had been focusing on the high bar event as his best chance for another medal after he felt he was past his peak due to persistent pain in his shoulders since Rio.

He was not part of the four-member national squad competing for the team gold. His younger teammates have that honor.

“They are heroes, not me anymore,” he said.

However, Uchimura made clear he was not thinking about retiring, at least for now.

“I love gymnastics so much. There still are many things to learn from it.”