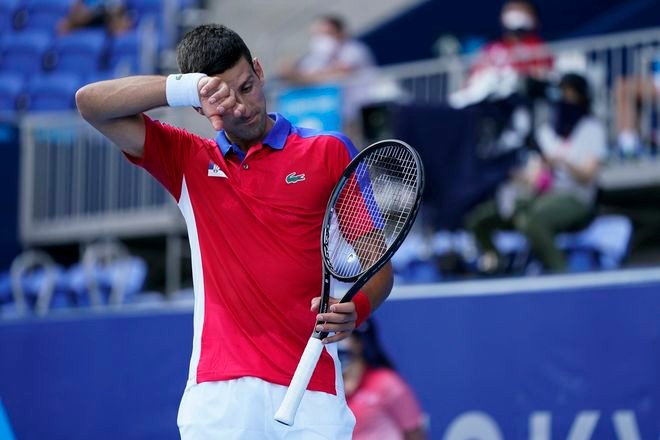 Novak Djokovic, of Serbia, wipes sweat from his brow as he competes Hugo Dellien, of Bolivia, during the tennis competition at the 2020 Summer Olympics on July 24 in Tokyo. (AP Photo)

Intense heat and humidity could force competition schedule changes at the Tokyo Olympics and the International Olympic Committee said on Sunday it would back any such plans if needed.

Athletes across several sports have complained that competing in midday heat, where temperatures regularly hit or exceed 33 degrees Celsius (91.4°F), has hampered their performances.

High humidity has added to discomfort, and athletes have failed to find much relief from ice bags and hoses blowing cool air, part of a series of contingency measures brought in by organizers' to battle the stifling heat.

Novak Djokovic and Daniil Medvedev--the world's top two men's tennis players--led calls to organizers on Saturday to move matches to the late afternoon for the rest of the competition to save players from the stifling conditions.

World No. 2 Medvedev suggested moving all matches to the evening.

"Competition schedules have been built where possible to avoid the hottest parts of the day but that is not possible with every sport," the IOC's sports director Kit McConnell said on Sunday.

In the tennis tournament, the first of four matches in the early rounds currently starts at 11.00 a.m. local time (0200 GMT), meaning players have to endure the hottest parts of the day on court.

Competitions at the Games are the responsibility of the respective international sports federations.

"Generally it has been working well. The International Tennis Federation (ITF) is looking at that and we will support them in any measures they are looking at," McConnell said at a news conference when asked about the problems at tennis.

The ITF said the weather was monitored constantly and should temperatures rise, an advisory group would decide on possible suspension of play.

"If the temperatures increase, the Wet Bulb Globe temperature (WBGT) threshold for a possible suspension of play will be determined by an internal advisory group," the ITF said in a statement.

The WBGT is a measure of the heat stress in direct sunlight, taking into account temperature, humidity, wind speed, sun angle and cloud cover.

"In planning for a possible suspension of play, the group will convene once the WBGT threshold reaches 30.1°C to consider the weather forecast for the current day plus the prior 1-2 days and next 1-2 days, as well as expert medical advice and all variables that determine player safety," it said.

Skateboarders, who made their Olympic Games debut on Sunday at the unshaded Ariake Urban Sports Park on the Tokyo waterfront, said the heat was already unbearable at 9 a.m. and that it was a distraction from performing their tricks.

Yahoo Tenki, one of Japan's most popular weather apps, offered caution over the risk of heatstroke, saying users should "avoid exercising under the sun" and "minimize vigorous exercise."