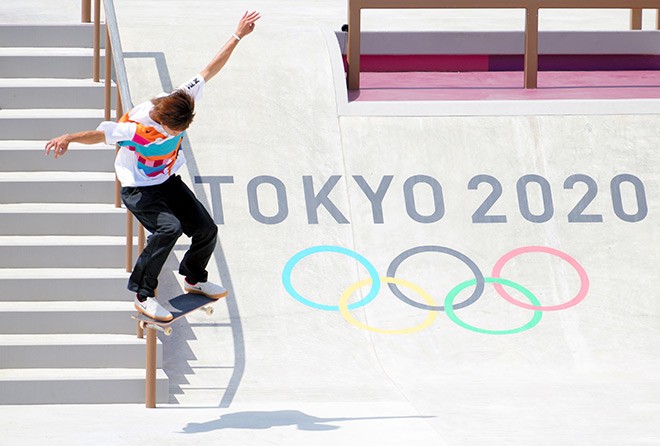 Yuto Horigome executes a trick at the men’s street skateboarding at the Ariake Urban Sports Park in Tokyo on July 25. (Reina Kitamura)

Yuto Horigome achieved his dream of becoming the first ever Olympic skateboarding champion July 25 at the competition venue in his native Koto Ward in Tokyo.

“This is my only one chance in my life to skateboard in my home town,” he told reporters prior to the Games. “I am after a Gold medal.”

Being ranked as the world’s top skater had been his dream as a young boy.

He also had another.

“I will build a home in America one day,” he declared when he attended elementary school, as those around him laughed at him.

After graduating from high school in Japan, Horigome, 22, moved to the United States, figuring it was the best country to hone his skills in the sport.

He joined world tours as a pro and became the first Japanese to win the world's premier Street League Skateboarding tour in 2018. He also won the world championships in June.

As for Horigome’s childhood dream, it is already a reality. Last October, he bought a home with four rooms in Los Angeles after winning sponsors in and out of Japan.

His house, naturally, comes with a skateboarding practice area.

Horigome’s strength derives from his insistence on maintaining original, technically demanding tricks that he reckons no rivals can match.

“When I thought about how to stand out from tens of thousands of skaters, I believed that I could get the crowd’s attention by doing tricks that others have yet to master,” he said.

Such maneuvers are created by a combination of how to jump, ride with a stance and turn.

Horigome watched videos of U.S. skaters active between the 1990s and 2000s to get further inspiration.

His father, Ryota, taught him how to skateboard as a child, and his coach, Daisuke Hayakawa, repeatedly showed him videos of tricks they thought were “cool” when they were in their 20s.

Those efforts paid off.