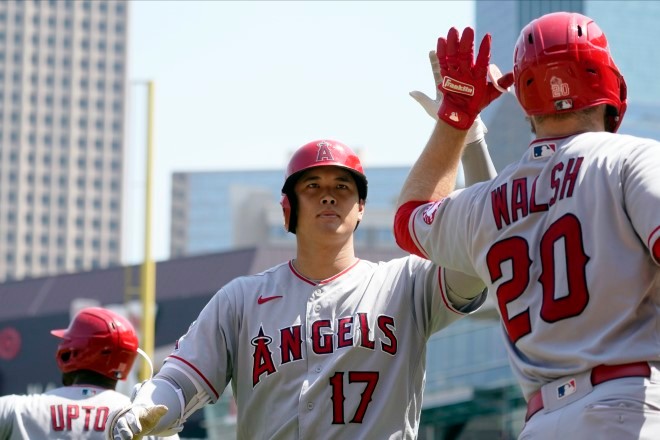 Max Stassi went 3-for-4 with a homer and triple and also tied his career-high with three RBIs and Shohei Ohtani hit his major league-leading 35th home run to lead the Los Angeles Angels to a 6-2 victory over the Minnesota Twins on Sunday afternoon in Minneapolis.

Jack Mayfield continued his hot hitting with an RBI double as Los Angeles climbed back to the .500 mark (49-49) by taking three of the four games in the series with the Twins.

Jaime Barria (1-0), who gave up back-to-back home runs to the first two batters he faced, picked up the victory. Despite the rough start, Barria, recalled from Triple-A Salt Lake on Saturday and making his first start of the season, ended up going seven innings and allowed two runs on four hits while striking out four.

Max Kepler went 2-for-4 with a homer and Brent Rooker also homered for Minnesota, which dropped to 3-8 since the All-Star break. Danny Coulombe (1-1) suffered the loss.

Minnesota took a 2-0 lead when Kepler and Rooker connected for home runs on back-to-back pitches leading off the bottom of the first. It was the 13th of the season for Kepler while Rooker’s 436-foot drive into the third deck in left field was his second of the season.

Los Angeles cut it to 2-1 in the second off Twins starter Bailey Ober when Brandon Marsh walked with two outs and then scored on Stassi’s first career triple off the scoreboard in right-center.

Stassi then tied it with his eighth homer of the season in the fifth, lining an Ober slider just inside the foul pole down the left field line.

Ohtani, who finished 2-for-3 with a stolen base, then gave the Angels a 3-2 lead in the sixth when he lined reliever Coulombe’s second pitch 414 feet into the plaza in right.

The Angels then broke the game open with a three-run ninth off reliever Jorge Alcala, highlighted by RBI doubles by Marsh and Mayfield and an RBI single by Stassi.