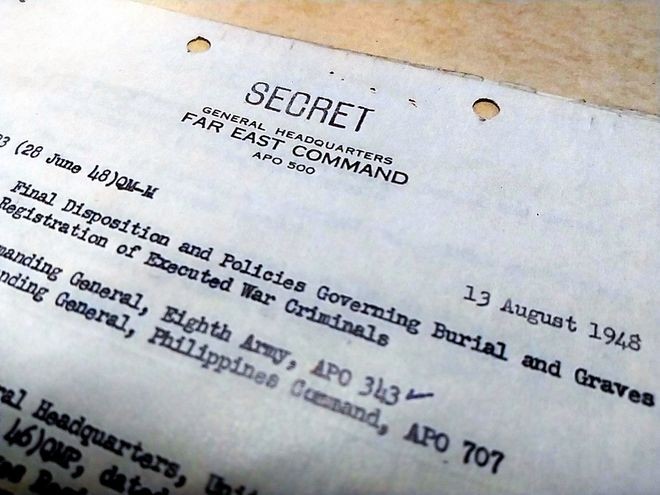 The U.S. Far East Command, headed by Gen. Douglas MacArthur as commander in chief, gives an order in this document dated Aug. 13, 1948, on the handling of the remains of executed war criminals. The photo shows a copy of the previously classified document kept at the U.S. National Archives and Records Administration. (Provided by Hiroaki Takazawa)

A newly discovered declassified document says the U.S. military ordered the remains of executed Japanese war criminals, including those of Class B and C, to be cremated and the ashes scattered at sea.

The document provides a glimpse of the U.S. military’s determination to make sure the ashes of war criminals would not be returned to Japan and not be used in the future to glorify the war.

Titled “Final Disposition and Policies Governing Burial and Graves Registration of Executed War Criminals,” the document was discovered recently by Hiroaki Takazawa, a full-time lecturer of law with Nihon University. It was found declassified and kept at the U.S. National Archives and Records Administration.

It is believed that 920 Japanese service members and civilian employees of the Japanese military were tried and executed as Class-B and C war criminals.

“I hope the newfound document will provide a clue to elucidating the little-known realities of the many Class-B and C war criminals who were executed after being tried in Yokohama and elsewhere,” Takazawa said.

Dated Aug. 13, 1948, the document is labeled, “By command of” Gen. Douglas MacArthur, who doubled as supreme commander for the Allied Powers and commander in chief of the U.S. Far East Command.

Part of the document says, “The remains of executed war criminals ... shall be cremated and the ashes disposed of secretly at sea.”

Another passage says, “It is desired that the remains of executed war criminals now in the custody (of the U.S. military) be exhumed as soon as practicable and disposed of as indicated ... above.”

When this command was issued, Class-A war criminals were under trial for “crimes against peace,” including the planning and initiation of a war of aggression, at the Tokyo tribunal.

At the same time, Class-B and C war criminals were also being tried for “conventional war crimes,” including abuse of prisoners of war and civilians, in Yokohama and Manila, and some were sentenced to execution.

The document testifies to a policy of going so far as “exhuming” any interred remains of the executed, including Class-B and C war criminals, to have them cremated and their ashes scattered.

The document also states, “The operation shall be conducted as soon as practicable after the execution.”

It goes on to say, among other things, that adequate security measures should be taken “against any substitution or removal of remains by any unauthorized persons” and no disclosure should be made as to the location of disposal.

“The bodies of executed war criminals will under no circumstances be returned to Japanese control,” the document emphasizes.

Takazawa has also obtained reports of the U.S. military concerning the handling of the remains of the seven Class-A war criminals who were sent to the gallows in December 1948.

The reports say the Eighth Army transported the corpses from Tokyo to Yokohama on the day of the executions, whereupon they were cremated and the ashes were scattered from above the Pacific Ocean in accordance with the earlier order.

“The ashes were planned to be scattered around to prevent the graves of the executed war leaders from being deified in the future,” a former senior official of the General Headquarters of the Allied Powers said in his book.

It is conceivable that the U.S. armed forces handled the bodies of the executed Class-B and C war criminals in the same way as the remains of those Class-A war criminals.

The trials for Class-B and C war criminals, however, were held in different parts of the world by seven Allied nations, including the Philippines, which took over the tribunals from the U.S. military after the country won independence.

It therefore appears unlikely that all the bodies of the executed were handled in accordance with the U.S. Far East Command’s order as described in the newfound document.