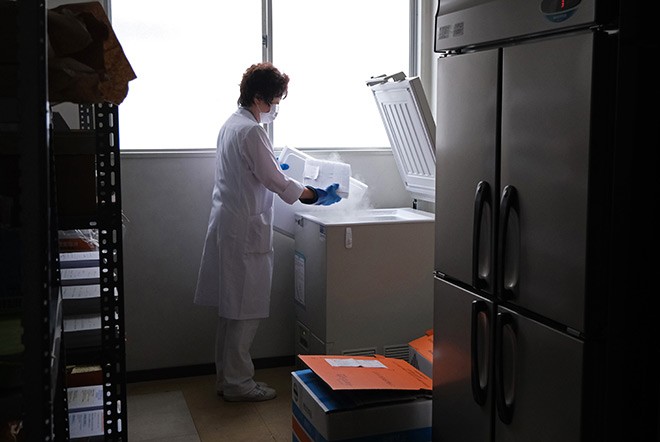 Hisako Kawajiri, deputy director of Toho Kamagaya Hospital, pulls out a box of Pfizer vaccines from a freezer at the hospital in Kamagaya, Chiba Prefecture, on July 13. (Wataru Sekita)

KAMAGAYA, Chiba Prefecture--The response to a hospital’s request for four boxes of COVID-19 vaccine doses drew incredulous looks from everyone aware of the situation there.

Central government records showed that the hospital surely must have a surplus of doses, so just one box would be provided, they were told.

Lacking a sufficient supply, Toho Kamagaya Hospital was forced to suspend the first-shot part of its vaccine program.

The problem with the supply chain facing Toho Kamagaya Hospital and other medical facilities around Japan stems largely from another shortage: tablet computers and personnel to register data for each vaccination.

The central government’s vaccine supply plans are based largely on data entered through the tablets for the centralized Vaccination Record System (VRS), which is supposed to keep tabs on individual vaccinations and personal information in real time.

But many medical facilities have complained that the cumbersome and often complicated VRS data entry process has made the information in the system out of date.

The central government, for example, says its VRS data on the distribution of Pfizer vaccines showed that enough doses have been shipped to local governments in Chiba Prefecture, making shortages unlikely.

However, the Chiba prefectural government contacted about 700 medical institutions in its jurisdiction on June 24 and asked if they had extra unused doses on hand. Most of the facilities said “no.”

Toho Kamagaya, a core hospital in this city of 110,000 people, began giving jabs to seniors in May at the request of a local association of doctors.

Prime Minister Yoshihide Suga was pushing for the immunization of all people 65 or older in Japan by the end of July.

In June, the hospital provided vaccinations six days a week, and administered more than 2,000 doses a week.

The hospital asked for the four boxes in June so that it would have a sufficient number of doses for the period from July 5 to July 18.

The Kamagaya city government, which is in charge of distributing vaccines to medical institutions on behalf of the central government, told hospital officials it could supply only one box.

It decided to use its remaining Pfizer doses for second shots, which are usually given three weeks after the first one.

The central government distributes a single tablet computer to each medical institution for the VRS system.

The tablet scans small 18-digit numbers on the vaccination vouchers to register data. The manual for the tablet states that the device must be about 7.5 centimeters away from the numbers to scan.

But maneuvering the tablet to focus on the numbers has proved laborious.

A worker assigned to the task at the hospital said that on some days she scanned the numbers for eight nonstop hours.

Since only one tablet was provided to each medical institution, only one person at a time can do the scanning.

The hospital administered up to 1,200 jabs a day. If it took one minute to register the data for one injection, the tablet user would need 20 hours to complete the task, making it impossible to enter all of the information on the day the shots were given.

At one time, data on vaccinations for more than 1,000 people were left unprocessed for several days after the doses were given, according to hospital officials.

For that period, the VRS system would show the hospital still had more than 1,000 unused doses.

Taro Kono, the administrative reform minister who is in charge of the vaccine rollout, announced that vaccine supplies would be curtailed from July for medical institutions that are slow in registering VRS data.

Since then, officials at Toho Kamagaya Hospital have scrambled to arrange for part-time workers to spend all day entering data, rather than half a day, to prevent the hospital from lagging behind in data registration.

Hospital staff are also expected to do the paperwork for expense claims for administering shots to the central government at the end of this month.

“The amount of preparation for the vaccination program and related paperwork tasks is extraordinary,” Hisako Kawajiri, deputy director of the hospital, said. “The more we vaccinate, the more our workload increases.

“Despite all that, we have cooperated with the vaccination campaign. But the central government has now cut vaccines supplies and is blaming medical institutions for the limited supplies. I cannot accept the way it has handled things.”