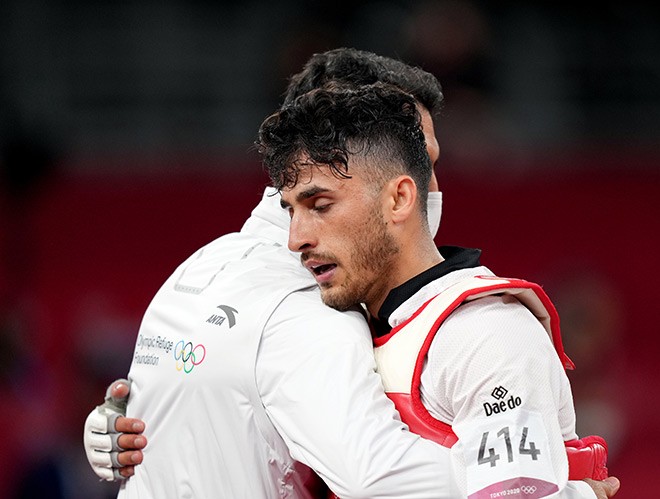 Abdullah Sediqi, right, and his coach hug after Sediqi lost against Zhao Shuai of Team China during the men's 68-kg taekwondo competition at Makuhari Messe Hall in Chiba Prefecture on July 25. (Ryo Ikeda)

Though Abdullah Sediqi, in his first Olympics, lost in the men’s taekwondo competition, the defeat was far from bitter.

During the men's 68-kilogram taekwondo competition on July 25, the Afghan put up a valiant fight against Zhao Shuai of Team China, a formidable opponent who won gold in the flyweight under-58 kg class in the 2016 Rio de Janeiro Games.

Zhao is about 10 centimeters taller than Sediqi, who showed the guts to persevere to the very end.

The fact that Sediqi, who competed as a member of the IOC Refugee Team, achieved his goal of participating in the Tokyo Games was a victory in itself.

To achieve that goal, the promising 24-year-old athlete, who began practicing taekwondo when he was 8, was forced to flee his war-torn home country to continue training in the sport after being attacked there by gangs.

“As a promising taekwondo athlete, I aroused a lot of jealousy in the place where we lived,” he said. “I was physically threatened by gangsters and could no longer live a normal life. At one point I feared for my life.”

He left Afghanistan in 2017 for Belgium, where taekwondo is thriving. The straight-line distance between the two countries was some 6,000 kilometers. To reach Belgium, the only thing he could rely on were his own two feet.

“There were days I walked for 12 hours straight,” he said.

He then began training, basing himself in Antwerp. In 2019, he entered the World Taekwondo Championships.

Competing in the Olympics loomed large on his radar. Then the world was hit by the coronavirus pandemic, forcing the Tokyo Games to be delayed by one year.

Before Sediqi left Afghanistan, his mother used to encourage him to become the world champion of taekwondo.

After the match, he said his first Olympics is “just the beginning” of his competitive career.

“I want to show people around the world that refugee athletes can also achieve their goals,” he said. “That's my goal.”