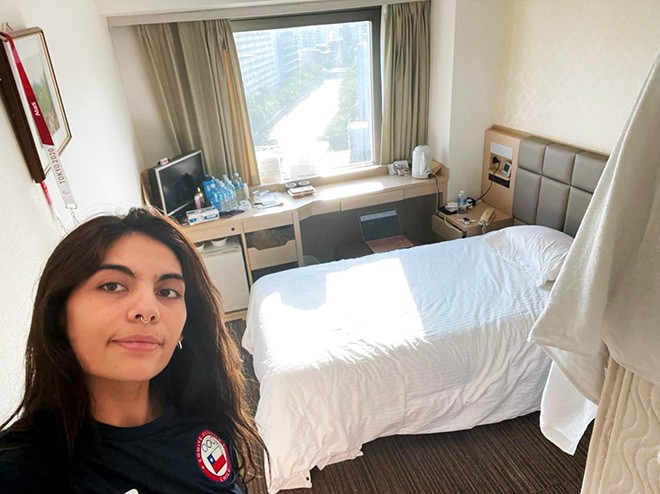 Chilean taekwondo athlete Fernanda Aguirre isolates in a hotel room on July 25 after testing positive for the novel coronavirus. (Provided by herself)

Chile’s Fernanda Aguirre wished it was all just a bad dream as she watched the Olympic taekwondo matches she was supposed to compete in had she not tested positive for the novel coronavirus.

Aguirre, 23, had entered the taekwondo 57-kilogram weight division, but just days ago became the first athlete to withdraw from a competition at the Tokyo Games because of COVID-19.

She is currently isolating in a hotel room overlooking the streets of Tokyo. On July 25, when her competition was originally scheduled, she was sitting on a bed, watching a livestream of her rival athletes’ matches online.

“It’s painful when I imagine myself competing with them,” Aguirre said in an online interview with The Asahi Shimbun.

She arrived in Japan on July 19 and took a polymerase chain reaction (PCR) test and an antigen test at the airport, according to the rules set out in the Olympic “playbook” for the Tokyo Games. The result came back positive.

Aguirre said she has no idea how or where she contracted the virus. She received her second COVID-19 vaccine shot in April. None of her fellow athletes or her trainers tested positive. She also tested negative in all three PCR tests she took before entering Japan.

She currently has no symptoms of COVID-19, nor does she feel ill.

But the Chilean Olympic Committee decided that Aguirre would withdraw from the Olympics because she could not participate in the July 25 competition, given the requisite 10-day quarantine period.

“The decision threw me into despair,” she said. “I couldn’t stop crying. It was my dream to compete in the Olympics. I spent years preparing for the Games. But all of them came to nothing in an instant.”

Aguirre took up taekwondo when she was 8. She said it gave her “peace of mind” as a young tomboy, and that the sense of achievement she had when she earned points at matches motivated her to continue in the sport.

Her family also supported her. Her father cheered her on by saying, “You’re the champion.” Her mother made her healthy meals, while her grandmother woke her up every day as she had trouble getting up on time.

As a result of her hard work and support from her family, Aguirre landed in the top ranks of a 2019 competition in Central and South America, qualifying her for the Tokyo Olympics.

Even after the Games were pushed back a year due to the pandemic, she remained positive, thinking she would be able to spend more time training. She devoted herself to practicing with her coach at a local university. Her tight stomach muscles are a testament to her hard work.

“Everything turned upside down,” Aguirre said, wiping her tears away with a towel.

She is now confined to a hotel room with two single beds, except for fetching meals at a designated place in the hotel.

“I eat exactly the same thing three times a day: rice, noodles and salmon,” she said in a tired voice.

Aguirre added that she spends time doing sit-ups and squats in the tiny room, and she uses a translation device when communicating with a nurse who checks on her over the phone.

She said her only emotional support is messages of encouragement from her family and friends. She also said she congratulated a Costa Rican athlete on social media who qualified for the Games in place of her.

Aguirre will turn 24 on July 29. She would have been enjoying her time in Tokyo as an Olympic athlete. But now, she has no idea when her quarantine will end.

“Right now, I just want to go home as quickly as possible,” she said. “I miss my family.”