Typhoon No. 8 to make landfall on July 27, affecting Olympic matches 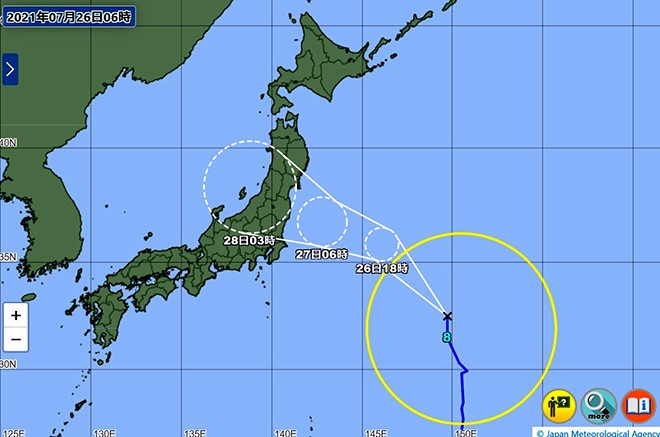 The predicted path of Typhoon No. 8 as of 6 a.m. on July 26 (Captured from the official website of the Japan Meteorological Agency)

Typhoon No. 8 is expected to make landfall in eastern Japan on July 27, forcing some Olympic events to be rescheduled.

The typhoon was traveling north-northwest over waters east of the Japanese archipelago on the morning of July 26, according to the Japan Meteorological Agency. After changing its course westward, it will likely approach the Tohoku and Kanto regions and make landfall on July 27, the agency said.

The JMA is warning that the typhoon may make atmosphere conditions in areas near its path unstable and bring extremely intense rain of 50 milliliters or more per hour to the regions.

As of 9 a.m. on July 26, the typhoon had a central barometric pressure of 992 hectopascals, maximum sustained winds of 72 kph near its center and maximum instantaneous winds of 108 kph.

It is expected to approach about 110 kilometers east of Choshi, Chiba Prefecture, on the morning of July 27 with a central barometric pressure of 990 hectopascals and maximum sustained winds of 72 kph.

The typhoon will likely weaken to a tropical depression on July 28, according to the JMA.

Tokyo Olympic organizers announced schedule changes for some archery events over bad weather expected because of the approaching typhoon.

The first and second rounds of individual matches scheduled for 9:30 a.m. on July 27 will be pushed back to noon the same day. The July 28 and 29 matches will be rescheduled.

The rowing events scheduled for July 27 are also being postponed because of the typhoon.