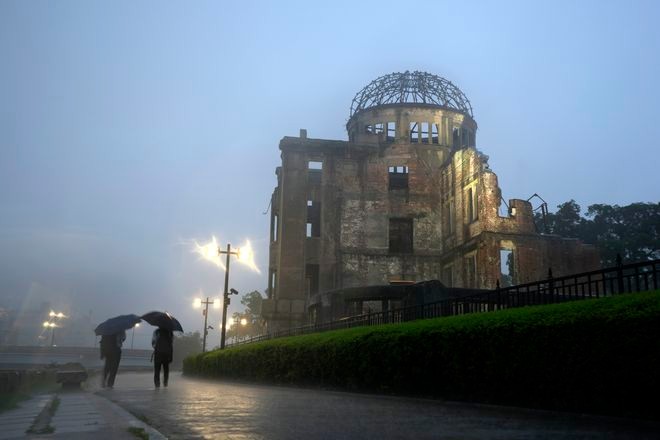 Men walk in heavy rain near the Atomic Bomb Dome in Hiroshima on July 15. (AP Photo)

Prime Minister Yoshihide Suga said Monday he has decided to grant official medical benefits to 84 Hiroshima residents who were exposed to highly radioactive “black rain” after the city's atomic bombing.

Suga's decision ends a long legal battle by the central government that delayed medical aid for the “black rain” victims, who were outside a government-set boundary used to decide survivors’ eligibility for medical care.

On July 14, the Hiroshima High Court upheld a lower court’s decision that the 84 are eligible for the same benefits as other atomic bomb survivors who were inside the boundary and ordered the government to certify their applications for state health care benefits.

“I have carefully thought about the ruling, and I believe that the 84 plaintiffs should be helped under the atomic bombing survivors' compensation law and its philosophy," Suga told reporters after meeting with Hiroshima's governor and mayor. “I have decided not to appeal to the Supreme Court."

The health ministry had maintained there is little scientific evidence proving the plaintiffs suffered from radiation exposure, but the high court ruled that the 84 developed radiation-induced illnesses and should be certified as atomic bomb victims eligible for government health care benefits.

The U.S. dropped an atomic bomb on Hiroshima on Aug. 6, 1945, killing 140,000 people in the initial period after the attack. A second U.S. atomic attack on Nagasaki killed another 74,000 before Japan’s surrender on Aug. 15 ended World War II.

The Hiroshima plaintiffs were in areas northwest of ground zero where radioactive “black rain” fell hours after the bomb was dropped.

They have developed illnesses such as cancer and cataracts linked to radiation after being exposed to the rain directly and by consuming water and food that was contaminated.

Hiroshima Mayor Kazumi Matsui, a second-generation “hibakusha," praised Suga for a “wise decision” and vowed to speed up the registration process for the victims. “The survivors don't have much time left,” he said, noting that their average age is now 84. He pledged to quickly issue certificates to all remaining victims who are still unrecognized.

Suga’s announcement came 10 days after Matsui visited Tokyo to urge health and welfare ministry officials not to appeal the case to the Supreme Court. He made the trip instead of escorting International Olympic Committee President Thomas Bach on a visit to Hiroshima to showcase the power of sports to achieve peace.