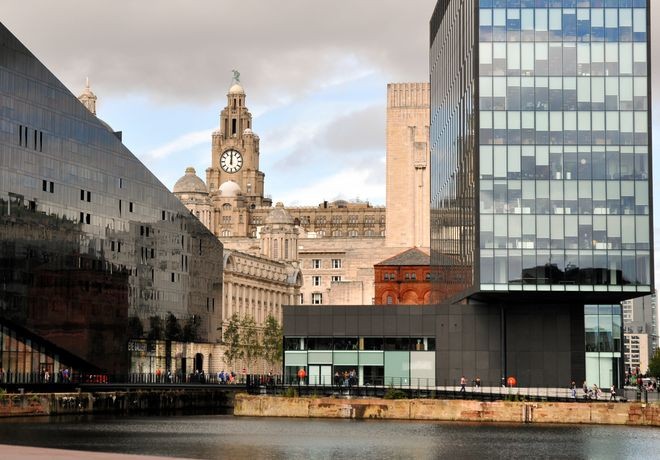 Traditional structures and modern buildings are seen in Liverpool, England, in 2017 before the area lost its registration as a World Heritage site. (Asahi Shimbun file photo)

The British city of Liverpool prospered from trade during the Industrial Revolution of the 18th and 19th centuries. Cotton from the United States was unloaded at the port of Liverpool and transported to nearby industrial cities.

The families of The Beatles, whose members were Liverpudlians, carried traces of that history. According to "Beatles Toshi-ron" (The Beatles urbanism) by Toshinobu Fukuya, John Lennon's father was a sailor and so was George Harrison's father at one time, while Paul McCartney's father was a cotton salesman.

The port of Liverpool was also a base of the slave trade. Even though that is a negative legacy, I believe it was natural that some sectors of central Liverpool were registered as UNESCO World Heritage sites in 2004.

Last week, however, the UNESCO World Heritage Committee revoked the registration, reportedly on the grounds that the value of the city's historic legacy has been diminished by redevelopment projects that are in progress.

Contemporary glass-and-steel structures have been built and a new soccer stadium is being planned for construction.

But for Liverpool today, it was probably inevitable that the city should seek rejuvenation through urban renewal. In Britain, London continues to thrive as the nation's financial hub, while former industrial areas have been languishing as of late.

One of the cases was in an old German city where the construction of a bridge to relieve traffic backups was considered a problem. Another was in Oman, where a wildlife sanctuary was downscaled.

It appears that making the UNESCO World Heritage list is no guarantee that the status will be permanent.

Liverpool has a small street named Penny Lane, immortalized by The Beatles in a song of that title. I was thrilled to visit it once.

I just hope the city will at least spare that neighborhood from tall buildings and other structures.