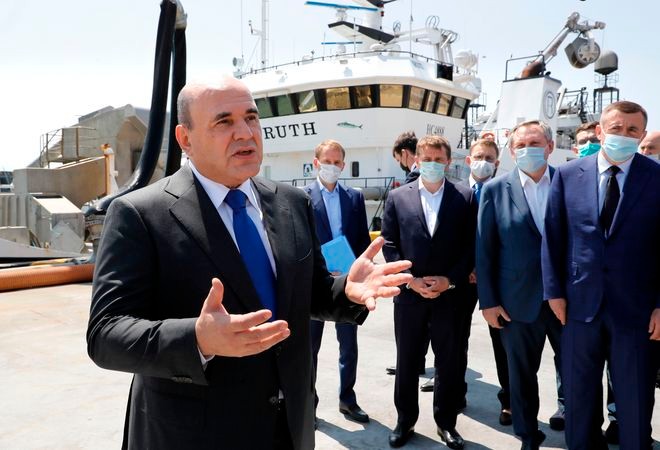 Russian Prime Minister Mikhail Mishustin visits the Gidrostroi's fish processing plant, on the disputed Pacific islands claimed by Japan, known by the Russians as the Kuril Islands and the Japanese as the Northern Territories on July 26, 2021. The Soviet Union took the islands in the final days of World War II, and the dispute has kept the countries from signing a peace treaty ending their hostilities. (Pool Photo via AP)

MOSCOW/TOKYO--Russia rejected what it called a hostile Japanese diplomatic protest following a visit by the Russian prime minister to a disputed island chain on Monday, saying he could go wherever on Russian territory he wanted.

A top Japanese government spokesman said earlier on Monday that Tokyo was lodging an official diplomatic protest over the visit by Mikhail Mishustin to one of four Russian-held islands to which Japan lays claim.

Russian news agencies said Japan had summoned the Russian ambassador over the matter.

Japan calls the islands the Northern Territories. Russia calls them the Kuril Islands.

The territorial dispute over the islands dates to when the then-Soviet Union seized them at the end of World War Two, and has prevented the two countries signing a formal peace treaty.

Mishustin was quoted by Russian news agencies as saying during the visit that Moscow planned to set up a special economic zone with no customs duties and a reduced set of taxes on the island chain.

"Russian Deputy Foreign Minister Igor Morgulov conveyed a strong protest to the Japanese side in connection with hostile steps taken by official Tokyo in recent days," the ministry said in a statement.

The Japanese embassy said in a statement that ambassador Toyohisa Kozuki, in his own expression of protest, described Mishustin's trip as "going against our country's consistent position on the Northern Territories".

The Japanese side "strongly demanded that the Russian side take constructive actions to advance peace treaty negotiations", the statement said.

The Kremlin said it valued and wanted to improve relations with Tokyo but saw nothing wrong with Mishustin's trip.

"As for the prime minister's trip to Iturup island, he visits those Russian provinces that he sees fit," President Vladimir Putin's spokesman, Dmitry Peskov, told reporters.

Peskov said Moscow would continue to work with Tokyo towards agreeing a peace treaty.

Mishustin said he would discuss with Putin what he called an "unprecedented" set of economic measures aimed at developing the islands. "This would be interesting...for Japan as well, which could create jobs and work with you if it is interested," he was quoted by Russia's RIA news agency as telling local businessmen.