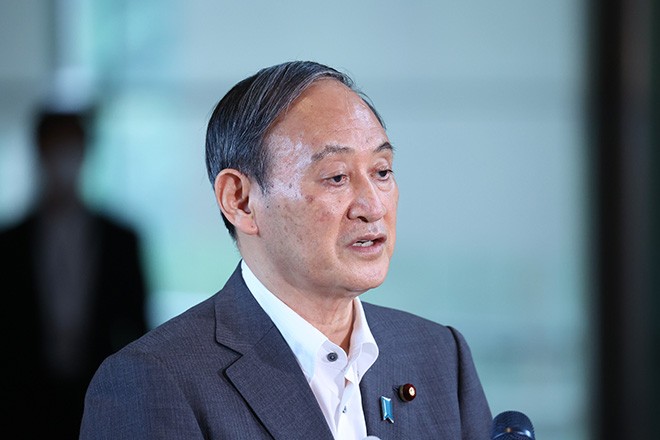 Prime Minister Yoshihide Suga tells reporters on July 26 that the appeal process in a 'black rain' lawsuit will be abandoned. (Koichi Ueda)

Prime Minister Yoshihide Suga broke with the consensus among ministry officials when he decided on July 26 to immediately grant relief to all 84 plaintiffs involved in a lawsuit regarding recognition as atomic bomb survivors.

The plaintiffs sought to be recognized as hibakusha because they were victims of the “black rain” that fell on Hiroshima in the days following the Aug. 6, 1945, atomic bombing.

Suga told reporters the government would also consider providing relief to others in similar circumstances to the plaintiffs.

On July 27, the Suga Cabinet approved a statement under the prime minister's name formally declaring that no appeal would be filed against the July 14 Hiroshima High Court decision, but also including wording about major "legal problems" that did not match past rulings.

The statement, in particular, raised serious doubts about the internal exposure to radiation through the ingestion of contaminated water and food stated in the high court ruling and said that aspect of the ruling was unacceptable.

Suga bowed to strong calls from the Hiroshima prefectural and municipal governments to not appeal the high court ruling. While many in the two levels of government hold sympathy for the health problems experienced by the plaintiffs, they were the defendants in the lawsuit because they administer relief to hibakusha on behalf of the central government.

Health and Justice ministry officials on July 23 asked the Hiroshima prefectural and municipal governments to appeal the high court ruling.

But because the two local governments could not be totally convinced to go along with the request, concerns were raised internally that the central government would appear to be the only one strongly urging an appeal.

That might have hurt the ruling coalition, which must contest a Lower House election by this fall. That likely led Suga to decide to abandon the appeal.

However, aspects of the high court ruling leave open the possibility of further expanding the relief aid so it also covers those who were exposed to radiation in the wake of the triple meltdown at the Fukushima No. 1 nuclear power plant in the wake of the 2011 Great East Japan Earthquake and tsunami.

In its ruling, the Hiroshima High Court said relief should be provided even if the plaintiffs did not have illnesses, such as cancer, that are normally used in defining hibakusha.

The high court also said if an individual is denied recognition as a hibakusha, it is the responsibility of the administrative branch to explain why.

The high court also raised the prospect of including health problems of individuals who ingested radiation-contaminated water or food, rather than only those who had external exposure to the black rain.

One high-ranking health ministry official said that if that standard was finalized and used as a precedent in other lawsuits, government policy regarding compensation for the Fukushima nuclear accident would be turned upside down.

Ministry officials had long argued in the black rain case that ingestion of food and water would only add up to small amounts of radiation that would be insufficient to cause any health problems.

(This article was compiled from reports by Kazutaka Toda, Ryuichi Hisanaga and Naoki Kikuchi.)