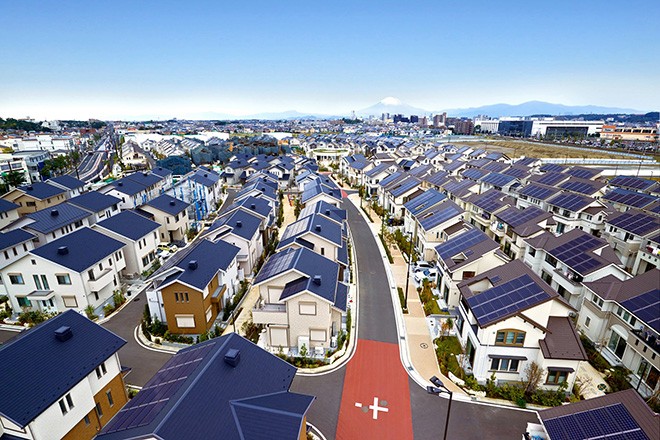 Japan's housing industry may face a significant hike in its obligations to create dwellings that are energy efficient to help Prime Minister Yoshihide Suga fulfill his goal to cut the nation's greenhouse gas emissions.

The ministries announced the new targets at a meeting of their joint advisory panel of experts that day.

Using the industry ministry’s draft proposal for the new Basic Energy Plan released on July 21, the Environment Ministry calculated the percentage of greenhouse gasses needed to be cut in each sector.

The figure is 66 percent for the household sector, according to the calculation. The government aims to achieve the target by saving an average 20 percent of energy at newly built homes by 2030 and switching all the household lighting to LEDs and other high-efficiency ones.

An official said the government has yet to decide on how many solar panels homes would have to install.

In the transport sector, the government plans to have the next-generation cars, including hybrid ones, account for 50 to 70 percent of new vehicles by 2030.

The latest draft plan serves as a blueprint for the government’s ultimate goal of reducing the country’s greenhouse gas emissions to net zero by 2050. But the plan will likely raise questions about its feasibility since it lacks detailed policies to implement the plan.

The government will finalize the plan and solicit public opinions on it before seeking Cabinet approval by this fall.

It will then compile new reduction targets and measures to achieve them based on the plan and submit them to the United Nations by the COP26 climate change conference to be held in Britain in November.

In the current reduction plan, drafted in 2016, the government set a goal of cutting greenhouse gas emissions by 26 percent by fiscal 2030 from the 2013 level to achieve an 80-percent reduction target by 2050.

In the new draft plan, the government included measures to curb greenhouse gas emissions by another 20 percent to be in line with Suga’s 46-percent reduction goal.

The measures include doubling the ratio of renewable energy and stepping up energy-saving efforts to reduce overall demand for electricity and other energy sources by 18 percent by fiscal 2030.

The government could present measures to cut only 39 percent of the greenhouse gas emissions when it set the 46-percent reduction target in April.

It later added measures to enhance energy conservation and boost the ratio of renewable energy, but the latest draft plan failed to provide detailed policies to carry out those measures.

At the July 26 expert panel meeting, one member called on the government to create a framework that allows the public and municipalities to formulate measures to reduce greenhouse gas emissions.