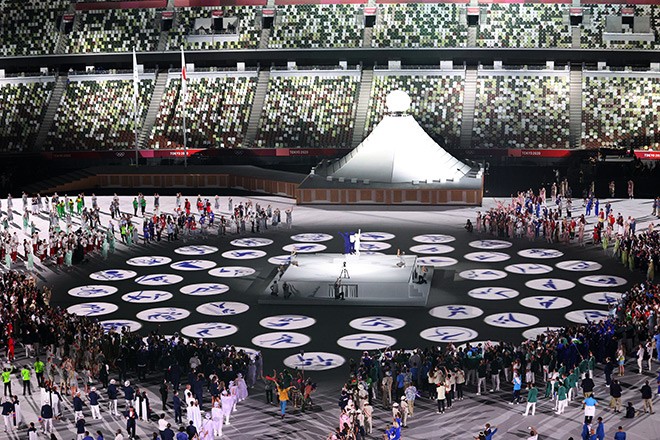 An estimated 70.61 million people in Japan--more than half of the country’s population--watched the July 23 Olympic Opening Ceremony on TV, according to audience rating firm Video Research Ltd.

The company’s preliminary figures, released on July 26, showed that the household viewership rate for the nearly four-hour ceremony averaged 56.4 percent in the Kanto region, which includes the capital.

The household viewership rate for the latest ceremony was 49.6 percent in the Kansai region and Nagoya and 48.2 percent in northern Kyushu, according to Video Research.

The viewership for the Kanto region soared to 61.0 percent momentarily for the performance featuring carpenters and firefighters from the Edo Period (1603-1867), with actress Miki Maya in the lead role, as well as during the athletes’ parade.

The ceremony at the National Stadium was aired live by public broadcaster Japan Broadcasting Corp. (NHK).

In the United States, an estimated 17 million people watched NBC’s telecast of the Opening Ceremony in Tokyo, the lowest number over the past 33 years, according to preliminary figures cited by U.S. news outlets.

The next lowest number of U.S. viewers, at 21.6 million, for an Opening Ceremony of the Summer Games was for the 1992 Barcelona Olympics.