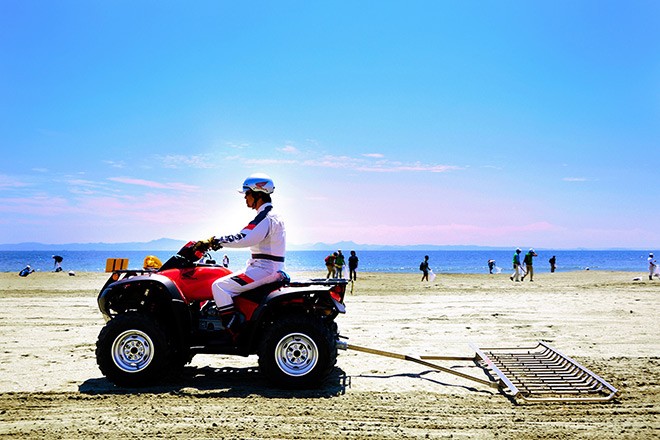 Honda Motor Co. is clearing beaches of trash with its own inhouse technology, a green initiative that started after employees noticed during an all-terrain vehicle (ATV) driving test that the beach was covered with litter.

The major automobile maker aims to expand its beach-cleaning activities to allow people to safely walk barefoot once again.

The company registered its patented technology on an intellectual property platform that collects environmental technologies from around the globe with the aim of improving the planet.

Honda’s “Beach Cleaner” is a device towed by ATVs that rakes up garbage. It combs the sand and dredges up small pieces of buried trash. Once the garbage appears on the surface, another device is equipped so it collects the debris.

Honda started using beach cleaners in 2006 and has conducted nearly 400 cleanups on about 200 beaches across Japan. It collected some 490 tons of garbage. It does not sell the cleaners, which are solely used for its own environmental conservation activities.

It all started during a driving test to determine the marketability of ATVs in 1999. Honda staff discovered the beaches were covered in trash, so they began to cooperate with the prototype department to develop beach-cleaning technology.

The first prototype to dredge up trash was not able to travel even a meter due to heavy resistance from the sand.

Inspired by agricultural machines, they developed towing equipment that can rake up trash.

Chief inventor Masahiro Inoue said it showcases Honda’s internal work culture, where every technician can share their own opinions and ideas with each other.

WIPO Green was originally born in 2013 from a proposal of the Japan Intellectual Property Association.

“We would like people to use WIPO Green not for their monopoly over the patent, but as tools that everyone can use,” said the online platform’s creator, Naoto Kuji.

Panasonic Corp. registered its technology that improves water quality by harnessing the power of electricity without using chemicals.

Chugoku Electric Power Co. also registered its technology that prevents shells from becoming attached to pipes that bring in seawater at electric power stations by using light of a certain wavelength. Such a technology can reduce conventional chemical methods, lessening the burden on the sea.