Chemistry forged over 16 years leads to ‘miracle’ in table tennis 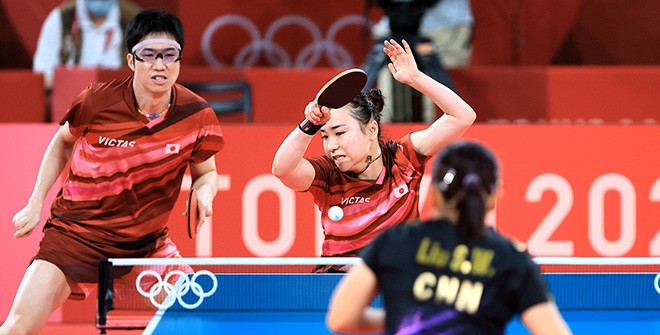 Losing badly to a seemingly unbeatable opponent, Mima Ito and Jun Mizutani had similar feelings, even though they may not have expressed them to each other.

They both thought they could still pull off the upset at the Tokyo Olympic table tennis event.

“I felt the Chinese were nervous, too,” Mizutani reflected.

Ito said she felt, “We can turn the tide once we win back a set.”

Although 12 years apart, Ito, 20, and Mizutani, 32, grew up together and have fostered such a mutual trust that they understand each other without talking.

That chemistry helped them come back in the mixed doubles table tennis match on July 26, beat the Chinese team for the first time, and secure Japan’s first-ever Olympic gold medal in the sport.

Like many top Japanese table tennis players, Ito and Mizutani had long considered China a “wall” too high and too strong to topple.

In the early stages of the match, the wall indeed looked like it would continue standing.

China’s team of Xu Xin and Liu Shiwen jumped out to an early lead in the best-of-seven-sets match as Xu’s hits proved difficult to handle.

Down by two sets, the Japanese players kept their cool, took the next three sets, and ended up winning a seven-set thriller.

The Japanese duo had never won a match against Xu and Liu, both former No. 1 world ranking singles players.

Both Ito and Mizutani were born and raised in Iwata, Shizuoka Prefecture.

When she was 4, Ito joined a local junior table tennis club, where she met Mizutani, a son of one of the coaches.

“He was always there, like my big brother,” Ito said, looking back.

Mizutani was already a rising star in table tennis, competing abroad as a member of Team Japan.

When Mizutani returned to Iwata, he spent most of his downtime relaxing at Ito’s house.

“I don’t know why, but I went over to (her house) like it was my daily routine,” Mizutani said, laughing.

Their sibling-like chemistry was exactly what the Japan Table Tennis Association was looking for in mixed doubles, an event newly added to the Tokyo Olympics.

The association initially planned to test various pairings among six male and female singles players on Team Japan and make a final decision shortly before the Olympics.

But the association named Ito and Mizutani as the mixed doubles pair in January 2020, when it announced members for the Tokyo Olympics.

Based on their good chemistry, the association concluded that the pair “is the closest we have to winning a medal.”

Mizutani, who had led table tennis in Japan for years and won a bronze and a silver medal at the 2016 Rio de Janeiro Olympics, did not make it to the national team as a singles player this time.

But that enabled Mizutani to focus on mixed doubles play.

By announcing the pair early and cutting short the selection process, the association gave Ito and Mizutani plenty of time to practice and prepare to achieve the ultimate goal: beating China.

Xu and Liu were also dropped as singles players in the Olympics and had focused on mixed doubles.

Table tennis is China’s national sport, and Chinese players have dominated the podium since it became an Olympic sport at the 1988 Seoul Games.

Until the 2016 Rio de Janeiro Games, China had won 28 of all 32 gold medals awarded in Olympic table tennis events.

Ito learned first-hand how passionate the Chinese are about table tennis. She described a tournament in China in autumn 2017 as an unforgettable experience that showed why the Chinese are so tough to beat.

“They played among each other to decide who would play at the next tournament. A player who lost would not be able to compete for a while,” Ito said.

“It was like a do-or-die situation, and they put their lives on the line,” she added.

Ito and Mizutani found themselves in a similar do-or-die situation after the second set on July 26.

But Ito appeared to gain confidence as the match wore on, while Mizutani played with his usual sense of stability.

As Ito predicted, the Japanese duo got the momentum after winning the third set.

In mixed doubles, the female player has to return the ball hit by the male opponent.

“She was very brave and had the courage to go up against male players,” Xu said.

“We may not see another pair like them in the future,” he said. “They had one chance at the Olympics, and they got it.”

As for the long-desired goal of defeating China in table tennis, Kurashima expressed the feelings of many in Japan.

“I still cannot believe it,” he said. “It finally came true.”

Mizutani was overjoyed but remained cautious.

“For all I know, the ‘Chinese wall’ is higher than what you all think it is,” the gold medalist said.

He said that one victory does not mean Japan has topped China in terms of base strength in the sport.

“I think the ‘Chinese wall’ will keep standing tall, but we found a way to chip into it a bit this time,” Mizutani said.