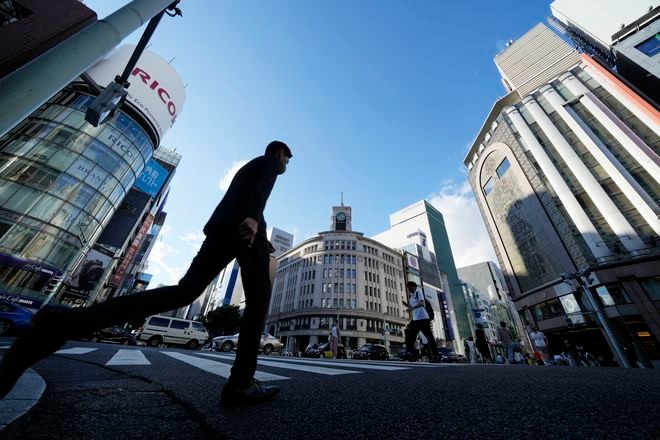 People wearing protective masks to help curb the spread of the coronavirus walk along a pedestrian crossing on July 27 in Tokyo's Ginza district. (AP Photo/Eugene Hoshiko)

It was the eighth consecutive day that daily new cases in Tokyo topped 1,000. A total of 1,461 more new cases were reported on the day than the same day a week ago.

The rolling seven-day average for new infections through July 27 was 1,762.6, an increase of 49.4 percent from the figure for the preceding week.

In July, it has become clear that a fifth wave of COVID-19 cases has hit the capital.

Almost every day since has seen more than 1,000 new cases reported.

On July 26, after the four consecutive holidays arranged for the Tokyo Games, new cases totaled 1,429, the most for any Monday.

The seven-day positivity rate was 14.5 percent on July 25, tying the record set on Jan. 7 in the middle of the third wave of infections.

Preliminary figures released by the metropolitan government showed that the Delta variant accounted for 30.5 percent of the total of new cases reported over the week through July 11.

As Tokyo has been placed under a fourth state of emergency, crowds in its entertainment districts are thinning somewhat, metropolitan officials said.

But the pace of infections is expected to accelerate in the coming weeks. Shigeru Omi, chief of the government’s expert panel on response to the coronavirus, has warned that the number of daily new cases could hit nearly 3,000 during the first week of August.

Health experts fear that hospitals in Tokyo will likely be overwhelmed by patients with COVID-19 in the coming days.

The number of serious cases requiring ventilators and other special breathing apparatus stood at 82 as of July 27, compared with 37 a month ago.