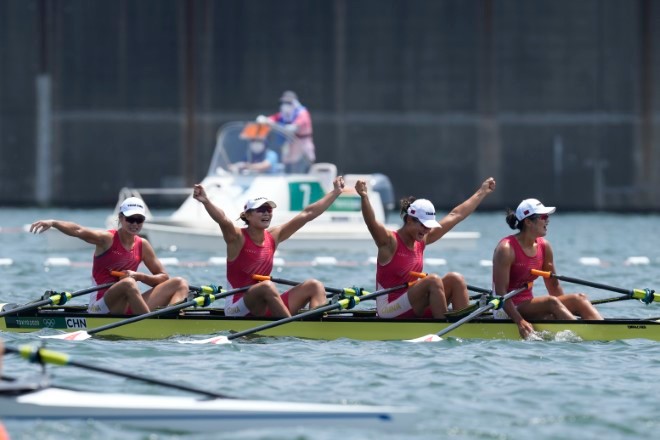 The Netherlands and China posted world best times to win gold in the men’s and women’s quad sculls races, respectively, as Olympic rowing roared back into action at Tokyo’s Sea Forest Waterway on Wednesday.

China obliterated their competitors, clinching the women’s quad sculls in 6:05.13, more than six seconds ahead of silver medalists Poland and bronze winners Australia.

On the men’s side, the Netherlands won gold--one of four medals they picked up during the day’s competition--in 5:32.03, 1.72 seconds ahead of Britain’s crew, with Australia claiming bronze.

The races kicked off on Wednesday under hot and windy conditions, after organizers suspended races for two days due to adverse weather forecasts, as competitors put up fast times across the board at the fan-free venue.

The first two rowing medal races of the Tokyo Games delivered thrills as Romania’s Ancuta Bodnar and Simona Radis won gold in the women’s double sculls while Hugo Boucheron and Matthieu Androdias of France triumphed in the men’s event, both with Olympic-best times.

Brooke Donoghue and Hannah Osborne of New Zealand picked up silver in the women’s event and the Netherlands’ Roos de Jong and Lisa Scheenaard earned bronze.

Meanwhile Melvin Twellaar and Stef Broenink of the Netherlands claimed silver in the men’s competition, and China’s Liu Zhiyu and Zhang Liang took the bronze medal, after a late break saw France secure the win in 6:00.33.

A rematch of the 2019 World Championship race between Australia and the Netherlands in the women’s four did not disappoint, as Australia once again came out on top - this time, in scorching 6:15.37--and the Dutch took silver.

Ireland propelled past fourth-place finishers Britain in the last quarter of the race, securing bronze for their second-ever rowing Olympic medal.

It was not the only heartbreak TeamGB endured on the water on Wednesday, as Britain’s golden run in the men’s four came to a stunning and abrupt halt.

The Britons veered out of their lane down the final stretch and finished fourth behind Australia, who clinched an Olympic best 5:42.76, silver medalists Romania and bronze-winners Italy, after having topped the podium at the previous five Games.