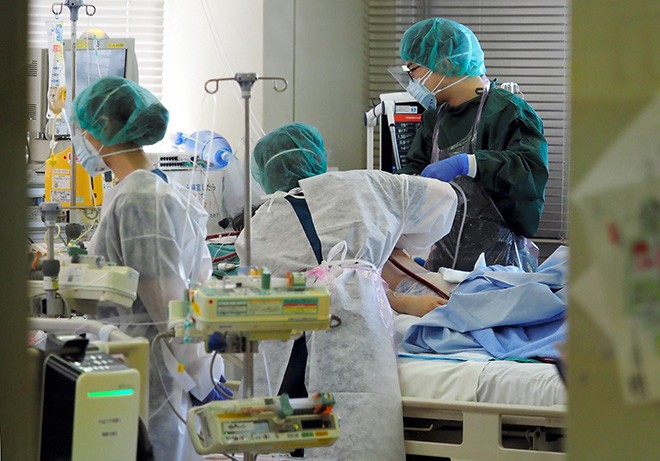 Government officials and health experts differed on the severity of the recent surge in COVID-19 cases in Tokyo and the possible effects on medical care facilities in the capital.

Tokyo reported a record high 2,848 new COVID-19 cases on July 27, continuing the trend of rising numbers under the latest state of emergency.

“If this pace continues, normal medical care will be endangered,” said Mitsuru Honda, chairman of the Emergency Medical Care Center at the Toho University Omori Medical Center in the capital’s Ota Ward.

He added that while the number of new COVID-19 cases was lower during the four-day weekend from July 22, “the rate at which hospital beds for such patients were being filled shot up sharply.”

The medical center has set aside six beds for COVID-19 patients with serious symptoms and 25 for those with mid-level symptoms.

By the four-day weekend, five of the beds for seriously ill patients and at least 20 for those with mid-level symptoms had been filled.

For Tokyo as a whole, 58 percent of hospital beds for patients with serious symptoms were occupied as of July 26.

The number of new cases over the course of a week is at about the same level as the peak figure for the third wave of infections this past winter. But at that time, about 80 percent of hospital beds for COVID-19 patients were filled, while the figure now is about 40 percent.

The major reasons for that improvement are the increase in hospital beds capable of taking in such patients as well as the larger number of senior citizens who have been vaccinated.

Norihiko Yoshimura, the head of the Tokyo metropolitan government’s Bureau of Social Welfare and Public Health, met with reporters on July 27 and tried to quell concerns about a possible crisis in the medical care system.

He explained that the situation now is vastly different from the third wave when about 14 percent of new cases in Tokyo were people 60 and older, the age group at the highest risk of developing severe symptoms.

That rate had dropped to 5 percent as of July 27.

Yoshimura called on reporters not to needlessly enflame concerns about a crisis. He said about 70 percent of the new cases now were of people under 40 who were at less risk of developing serious symptoms.

But there are troubling signs.

Shortly after a state of emergency began on Jan. 8, a day after the peak for infections during the third wave, the number of new COVID-19 cases in Tokyo began declining.

The latest state of emergency has now been in place for two weeks, and the daily infection figures are not decreasing but rising sharply.

Some health experts pointed to the higher pedestrian traffic in major Tokyo entertainment areas as a worrying sign that the increases would continue.

“The current level of those milling around at entertainment areas makes it difficult to forecast when the infection spread will be brought under control,” said Atsushi Nishida, head of the Research Center for Social Science and Medicine at the Tokyo Metropolitan Institute of Medical Science, which has been conducting studies on pedestrian traffic in the capital.

Nishida said a further decline in pedestrian traffic would be needed to lower the number of new cases, given that the highly contagious Delta variant is now having a larger impact.

The Tokyo metropolitan government’s definition of COVID-19 patients with serious symptoms also clouds the picture of the medical care structure.

Only patients using ventilators and other assisted-breathing equipment are defined as having serious symptoms. Under that definition, Tokyo had 82 COVID-19 patients in serious condition as of July27.

But the health ministry also includes patients treated in intensive care units as having serious symptoms. If the ministry’s definition is used, Tokyo had 676 seriously ill COVID-19 patients as of July 25.

(This article was compiled from reports by Akiyoshi Abe, Kenji Tamura, a senior staff writer, and Momoko Ikegami.)