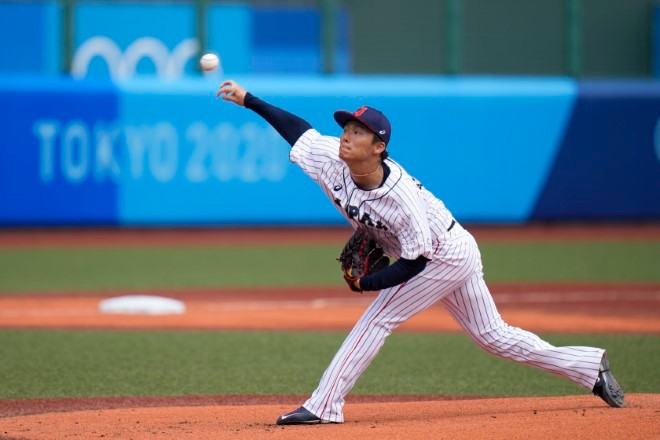 Japan starting pitcher Yoshinobu Yamamoto throws against the Dominican Republic during the first inning of a baseball game at the 2020 Summer Olympics on July 28 in Fukushima. (AP Photo)

International Olympic Committee President Thomas Bach and Japanese baseball great Sadaharu Oh are attending the opener of the Olympic baseball tournament and were on the field for the ceremonial first pitch in Fukushima.

They were joined by Tokyo Organizing Committee President Seiko Hashimoto and World Baseball Softball Confederation President Riccardo Fraccari as a high school baseball player from the region threw out the first pitch--a full windup from atop the rubber.

Bach, wearing bright white gloves on both hands, fist bumped the 14-year-old before Team Japan took the field for its game against the Dominican Republic.

It’s the only Olympic baseball game being held in Fukushima, which was devastated by an earthquake and an ensuing tsunami and nuclear accident in 2011. The rest of the tournament will be held at Yokohama Baseball Stadium in Tokyo.

Baseball was restored to the Olympic slate this year for the first time since 2008. The sport will be dropped again for the 2024 Games in Paris but is expected to again be played in Los Angeles in 2028.