Memorial honors U.S. B-29 crew killed after crash, some as POWs 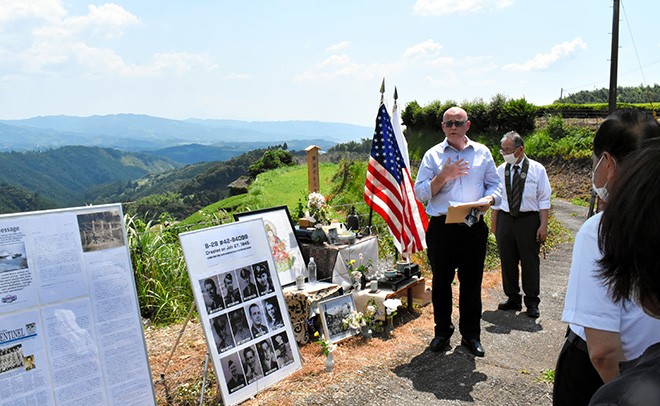 Andrew Staples, consul for the U.S. Consulate in Fukuoka, gives a speech on July 27 at a memorial service at the site where a U.S. B-29 bomber crashed 76 years ago in Yame, Fukuoka Prefecture. (Takao Nogami)

YAME, Fukuoka Prefecture--Twelve U.S. service members who either died or were executed as prisoners of war after their bomber was shot down near the end of World War II were honored in a memorial service here on July 27.

Local residents had held a small memorial service for the U.S. servicemen on three occasions, but this year’s event was the first time where organizers tried to reach the crew's relatives in the United States.

“We cannot change the past, but we can learn from it,” wrote Patricia Warren, the daughter of crew member Charles Appleby, in a statement that was read aloud at the memorial, the first time a statement by a relative of the crew had been included in the event.

“I want my grandchildren and great-grandchildren to live in a peaceful world. I think it is time to heal from the past and reach out in friendship for the sake of both of our peoples.”

Warren, who lives in Antioch, California, was 2 when her father died at 21.

The crew’s Boeing B-29 Superfortress was part of a U.S. air raid on Omuta, a nearby city with munition factories, early on July 27, 1945.

The bomber, whose serial number was 42-94098, was brought down in the mountainous part of Yame after being hit by anti-aircraft fire from the Japanese military.

Two of the crew members died in the crash. The remaining members managed to escape from the plane and parachute to the ground.

But one was killed during fighting with a local group of civilian defenders who hunted for the U.S. bomber crew.

The rest were later captured by the group or local residents and became prisoners of war and sent to Fukuoka. They are believed to have been put to death in a series of executions held in Fukuoka by the Imperial Japanese Army’s western district right before Japan's surrender in August 1945.

About 15 people attended the service, including Andrew Staples, consul for the U.S. Consulate in Fukuoka, and Yame Mayor Tsuneyuki Mitamura.

In front of the portraits of each member of the crew, participants renewed their pledge to warn younger generations of the folly of war and to stress the preciousness of peace.

Staples said he felt the commemorative ceremony gave a strong sense of peace in the heart of the relatives of the Americans killed.

The message from Warren was read by Hiroyuki Fukao, an aerial combat history researcher who is a member of the Missing Air Crew Research Japan Network.

Fukao organized this year’s memorial service by contacting Yame officials and searching for relatives of the deceased crew members.

An exhibition on the remnants of the aircraft held last August by Yame education officials to convey the brutality of war to younger generations in part inspired Fukao to organize the memorial.

Fukao, who located Warren, is still searching for other bereaved family members of the crew who he hopes to take to the site some day where the remnants of the bomber were discovered.