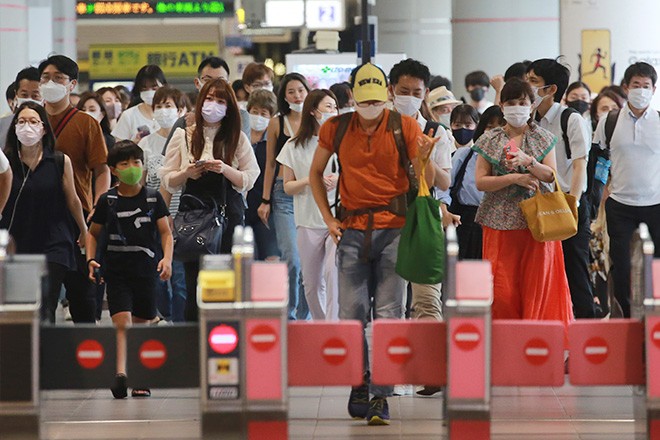 People wearing face masks to protect against the spread of the coronavirus walk at a train station in Tokyo on July 28. (AP Photo)

The number of new COVID-19 cases in Japan on July 28 surpassed 9,000 for the first time, with Tokyo adding a record high 3,177 infections to the total, government officials said.

The highly contagious Delta variant of the novel coronavirus has led not only to record infection figures in the Tokyo metropolitan area but is apparently also spreading elsewhere around the nation.

Just the previous day in the capital, 2,848 new infections were confirmed, smashing the earlier record of 2,520 set on Jan. 7.

The total on July 28 not only set another high, but it was also the first time for the figure to exceed 3,000, metropolitan government officials said.

On reason for the surge is that more people have been tested for the novel coronavirus this week. Most medical institutions were closed between July 22 and July 25 because two holidays were added to the weekend for the opening of the Tokyo Olympics.

Tokyo Governor Yuriko Koike said on July 28 that the virus is spreading fast among young people, and some of them have developed serious symptoms.

In contrast, the number of infected people aged 65 or older has declined, she said, apparently because they received priority in the vaccination program.

“Please ensure that you stay home unless you have something absolutely necessary to do outside, and thoroughly follow COVID-19 safety protocols,” she said.

The governor also called on young people to get vaccinated.

In Hokkaido, 227 people were newly confirmed infected. It was the first time in about two months for the number on the northern main island to exceed 200.

Okinawa Prefecture confirmed 347 new COVID-19 cases, the second consecutive day for the figure to exceed 300 in the southern island prefecture.

According to Tokyo metropolitan government officials, the seven-day average of new cases in the capital reached a record high of 1,954.7 on July 28, up 53 percent from the figure a week ago.

These figures indicate that Tokyo is now in the grip of the largest wave of infections so far at a time when the once-delayed Olympics are well under way in the capital.

Chief Cabinet Secretary Katsunobu Kato on July 28 did not give a direct answer when asked by a reporter if Prime Minister Yoshihide Suga still believes that staging the Summer Games in the current virus situation is not problematic.

Suga had earlier ruled out the possibility of canceling the Games despite the increase in infections in Tokyo.

The reporter referred to Suga’s remark at a June 7 Diet session that his decision on whether to hold the Olympics will be made on the premise of protecting people’s health and lives as a top priority.

“The central government has imposed various safety measures,” Kato said. “There has been a decline, albeit slow, in the number of people staying out at night, compared with the last state of emergency.”

He also said the central government is not aware of any reports of Olympians or officials having developed serious symptoms after being infected.