Organizers of Games apologize for tossing food on opening night 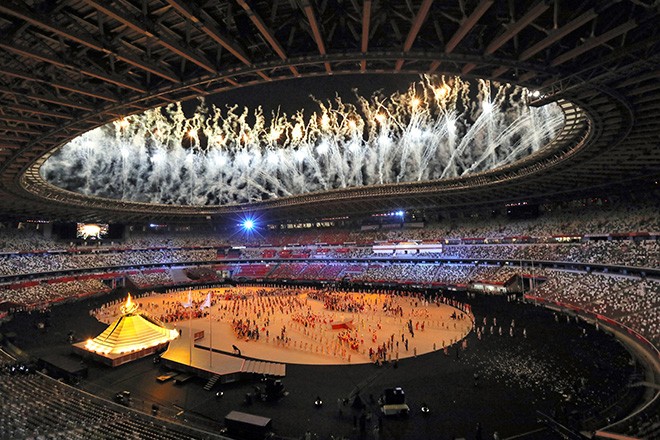 Fireworks go off over the National Stadium at the end of the Opening Ceremony for the Tokyo Olympics on July 23. (Yasuhiro Sugimoto)

A representative of the Tokyo Olympic organizing committee apologized for disposing of some 4,000 meals before their expiration dates at the venue for the Opening Ceremony.

The committee said on July 28 it confirmed food prepared for Games’ staff was discarded at the National Stadium in Tokyo’s Shinjuku Ward and several other Olympic venues that had hosted competitions by July 25.

“We apologize for the huge (food) waste,” said a public relations official of the committee.

The committee said it ordered 10,000 meals for staff working for the Opening Ceremony at the National Stadium on July 20, three days before the event. By that time, organizers had already decided to hold the ceremony without spectators.

The public relations official attributed the food losses to a combination of many factors, such as overestimating demand when placing the order and a fear of running out of food.

The official said the discarded food will be reused as feed and that the committee changed the procedures for ordering food from July 26 to prevent a recurrence.

The International Olympic Committee had asked the organizing committee to pay attention to the sustainable development goals (SDGs) when making arrangements for the Olympics.

The Tokyo Games sustainable sourcing code also stipulates that the organizing committee should “fulfill its social responsibilities through procurement with consideration for sustainability, as well as economic rationality.”

It also states that the organizing committee will try to reduce the overall amount it procures as much as possible.

Japan News Network, a TV program aired by Tokyo Broadcasting System Television (TBS) Inc., also reported in its July 24 broadcast that thousands of rice balls and boxed meals prepared for volunteers at the National Stadium were thrown away before their expiration dates.