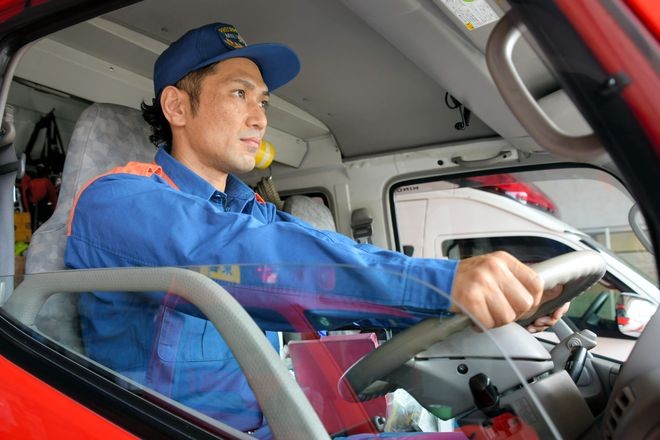 Yuta Ushuku, behind the wheel of a fire engine in Iga, Mie Prefecture (Minami Endo)

Whenever someone thanks firefighter Yuta Ushuku, he can't help recalling the stampede that killed 11 spectators at a fireworks show on a crowded footbridge in Akashi, Hyogo Prefecture, 20 years ago.

He still hears the repeated "thank you" from the father of the girl he rescued on the scene. The words affected him more deeply than any he had ever heard.

The bridge was overloaded with people, being squashed by others around them.

Up to 6,400 people were on the footbridge, according to the survey report on the accident. The most crowded southern part of the path accommodated more than 13 individuals per square meter. Some fainted on their feet.

Ushuku, now 38, and a chief staff at the Iga fire station’s east branch in Iga, Mie Prefecture, was a freshman at Kobe Gakuin University on the day of the fireworks event, and headed for Okura Beach in Akashi to watch it with friends.

After arriving at JR Asagiri Station, they took a pedestrian overpass measuring 103 meters long and 6 meters wide that led to the beach. Spectators ahead of them became stuck while an additional wave of people flocked to the bridge.

Ushuku and his friends felt increasingly squashed by the people around them. Because the overpass was enclosed, with walls on its sides and a roof, the temperature inside rose so high it made it difficult for people on the bridge to breathe.

“I felt like I'd been buried in the sand of a beach,” Ushuku recalled.

He then heard someone just behind him shout “she's lost consciousness” and looked back to find what appeared to be an elementary school girl lolling listlessly held in her father’s arms.

The human avalanche had occurred 10 meters ahead of him. Ushuku resorted to bold action.

“I'll climb onto the roof,” he shouted and asked the people around him to let him “use your shoulders.”

He then scrambled over the bodies of people nearby in his ascent to the 2.5-meter-tall roof, which had an opening in its central part.

In the process, Ushuku saw a harrowing sight: A mountain of people laying over each other and an elderly woman lying on top with her pale face up.

As he grabbed the girl and pulled her up onto the roof, someone next to him begged him to rescue “my kid as well” and he also got hold of the boy and brought him to safety.

Ushuku ran in a direction toward the station on the top of the bridge, yelling his lungs out to tell the hordes of people on the overpass to “go back.”

"Something terrible is happening in front of you,” he shouted.

He managed to find the girl’s father in the chaotic aftermath of the accident, only to lose sight of him once before being able to make his way over to him to return his daughter. The father, with his daughter back safe and sound, told Ushuku “thank you” again and again.

Nine children ranging in age from 0 to 9 and two citizens in their 70s were found dead after the bridge had been cleared. A total of 247 people were injured in the accident.

Two years following the disaster, as he was about to begin looking for a job, Ushuku recalled the father’s words of appreciation and settled on pursuing a career where he might have another chance to save lives.

He took a test to become a firefighter but failed.

Following that, he joined a company in Kyoto Prefecture, but found he couldn't give up on his dream to be a firefighter.

At age 25, he was hired by the firefighting department in his hometown, Iga.

Working as a fireman made him realize how risky his behavior back on the bridge had been. If he had lost his balance on the inclined rooftop, he could have killed the children by dropping them on the road on the opposite side of the pedestrian bridge.

Looking back on the day, Ushuku smiled bitterly and described what he did as “really reckless in hindsight.”

Ushuku, however, noted he feels no regret about his actions.

“It was the best thing I could do at the time,” he said.

Ushuku has since fought fires in various locations. Hearing people say "thank you" to him still reminds him of the accident that day.

The girl he rescued is now 29. She currently serves as a nurse at a medical center in Kobe.