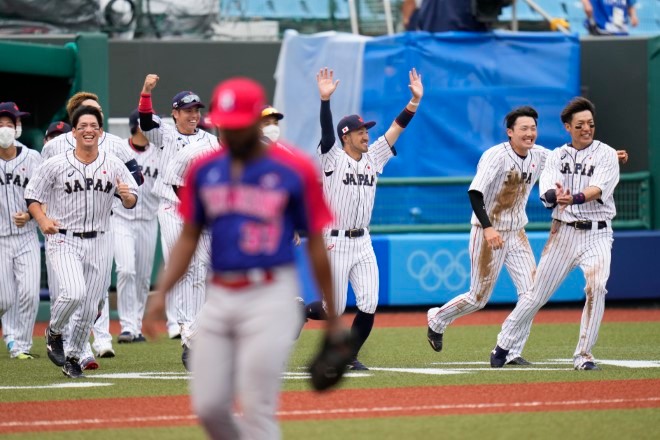 High-fives abounded for hosts Japan after they staged a thrilling final-inning comeback to defeat the Dominican Republic 4-3 on Wednesday to begin the baseball competition at Tokyo 2020.

Four singles and a bunt in the ninth inning off of Dominican closer Jairo Asencio brought Japan two runs to tie the game. Hayato Sakamoto then struck a game-winning drive.

“It was very difficult for us to get into a rhythm because today was the first day,” Japan’s Tetsuto Yamada, who was part of the late rally, told Reuters.

“But it was always in my head that one hit could change the situation. There was no hesitation,” he added.

Baseball is popular in Japan, and fans have high hopes for a good performance by their team in a sport restored at the wishes of Tokyo Games organizers after previously featuring in the Olympics from 1992 through 2008. Cuba have won three gold medals and the United States and South Korea one apiece.

Japan and the Dominican Republic now each face Mexico later this week. The teams’ records after those games decide seeding for a double-elimination tournament that begins on Sunday and also includes the United States, underdog Israel and defending champion South Korea.

Mercedes, 27, who is 5-1 for NPB’s Yomiuri Giants this season, struck out Giants’ teammate Sakamoto and dominated league hitters he faced as recently as July 10, when he pitched before 18,000 fans.

Mercedes “gave us every chance to win. It was a gutsy outing,” said Jose Bautista, a two-time Major League Baseball (MLB) home run leader who has been a free agent since 2018.

Japan “got hot at the right moment and we were at the wrong end of it,” Bautista told Reuters.

The Japanese government instituted stricter COVID-19 spectator restrictions for the Olympics, meaning a Dominican delegate pounding on a small drum was among the few dozen people cheering.

Suited-up Olympics organizers on hand for the first pitch scattered before any runs were scored. Those included Japanese baseball legend Sadaharu Oh, 81, who appeared in the Games Opening ceremony on July 23, and International Olympic Committee President Thomas Bach, who is being lobbied to make baseball and softball permanent fixtures.

Players from NPB, Korea’s professional league and MLB training system Minor League Baseball dominate the Games because the world’s premier organization, MLB, does not allow its top players to participate. That has starved the Olympics of globally recognized superstars including Japan’s Shohei Ohtani and Dominican native Fernando Tatis Jr.

The Dominican Republic competed a player short. Starting third baseman Diego Goris was booted from the Games last Saturday for a positive cannabis test. Replacement Gabriel Arias has not joined up with the team yet.