OLYMPIC/ Teenage skater gets legal surprise on return to Brazil 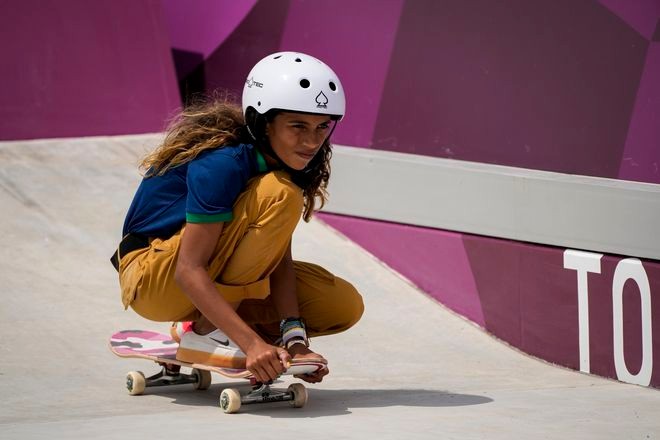 Rayssa Leal of Brazil skates back after completing a trick in the women's street skateboarding at the 2020 Summer Olympics, Monday, July 26, 2021, in Tokyo, Japan. (AP Photo/Ben Curtis)

SAO PAULO--Brazil’s youngest Olympic medallist, Rayssa Leal, arrived home on Wednesday to find a lawyer she did not know had trademarked her nickname because she was worried unscrupulous business people might take advantage of the 13-year-old skateboarder.

Flavia Penido said she applied to register the ‘Little Fairy’ nickname given to Leal, who won a silver medal in Tokyo in the street category.

Penido watched Leal’s performance that enchanted Brazil in the early hours of Monday morning and soon after consulted national trademark authorities to see if anyone had registered the name for skateboarding clothes or equipment.

When nothing appeared she took action to register the name on the girl’s behalf.

“Sometimes you have to make quick decisions,” Penido said on Twitter.

“The interest is obviously not economic but to preserve Rayssa’s eventual rights and show the importance of always having marketing and law work in tandem.”

Penido said she was ceding the rights to the athlete. Leal's family did not immediately respond to emails requesting comment.

Leal earned the nickname when a video of her performing skateboard tricks in a fairy outfit went viral in 2015 after it was shared by skateboarding superstar Tony Hawk.

Her popularity boomed in the hours following her win, with Leal adding millions of twitter followers after her podium appearance.