Tokyo’s state of emergency becoming a state of complacency 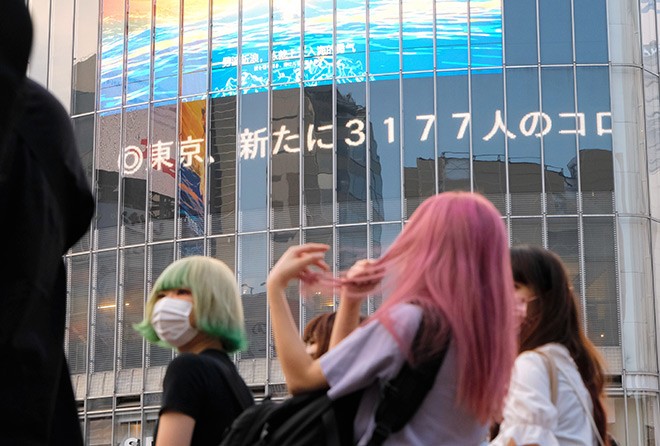 A digital display in the Shibuya district of Tokyo shows that a record 3,177 COVID-19 cases were confirmed in the capital on July 28. (Wataru Sekita)

The public has increasingly ignored COVID-19 warnings from a government that is OK with hosting the world’s biggest sporting event in a densely populated metropolis during a still-raging pandemic.

A panel of experts advising the health ministry on stemming the spread of the novel coronavirus agreed at a July 28 meeting that the general public is simply not responding to repeated calls by government officials to restrain their outings and drinking sessions.

The experts said the current spread of new COVID-19 cases around Japan was “unprecedented.” And it could get worse if the government cannot get the public to feel a sense of urgency about reducing the risk of infection.

“We want the public to consider the possibility of infection as a personal matter, but with the Olympics being held, comments such as ‘don’t gather in groups’ and ‘stay at home’ do not sound very convincing,” a member of the health ministry panel said.

Pedestrian traffic in Tokyo has decreased since the fourth state of emergency was issued for the capital more than two weeks ago.

But the decline has not reached the level needed to reduce infections, and the decrease is also less sharp than after the third state of emergency was declared.

The experts noted that about 75 percent of the cases now being reported can be attributed to the more virulent Delta variant.

The panel at the meeting released the number of new cases per 100,000 residents over the course of a week until July 27. The figure for Tokyo was 88.63, representing a 1.49-fold increase over the previous week.

The rates of increase for Tokyo’s neighboring prefectures and other regions were also high, with Hokkaido rising 1.35-fold, Saitama Prefecture up 1.58-fold, Chiba Prefecture surging 1.48-fold, and Kanagawa Prefecture up 1.37-fold.

Nationally, the increase rate was 1.54-fold.

The Tokyo Metropolitan Institute of Medical Science compared the rates of decrease in pedestrian traffic between the third and fourth states of emergency in the capital.

Tokyo bars and restaurants have been asked not to serve alcohol under the state of emergency.

But many establishments in the Ueno district of the capital brazenly set out signs advertising that alcohol was available for customers.

One “izakaya” Japanese-style pub was crowded with beer-guzzlers watching Japan beat the Dominican Republic in Olympic baseball on July 28. Many of the customers were not wearing face masks.

One member of the health ministry panel said the situation was fast approaching in which local residents who develop illnesses will be unable to get adequate medical treatment.

Shigeru Omi, head of the government panel of health experts, appeared at the July 28 session of the Lower House Cabinet Committee even though the Diet is not currently convened.

He said while pedestrian traffic had gradually decreased after the fourth state of emergency was declared, it had not yet reached levels that would lead to controlling new infections.

Omi added that the numbers of COVID-19 patients being hospitalized, those with serious symptoms, and patients resting and recuperating at home or other accommodations have all increased.

He also raised concerns about the tight medical care situation.

“One of the major reasons for these trends is that a sense of crisis has not been adequately transmitted to the general public,” Omi said. “It is very important at this stage for everyone in Japanese society to share that sense of crisis.”