Doctor in charge of Olympic venue keeps asking: Why now? 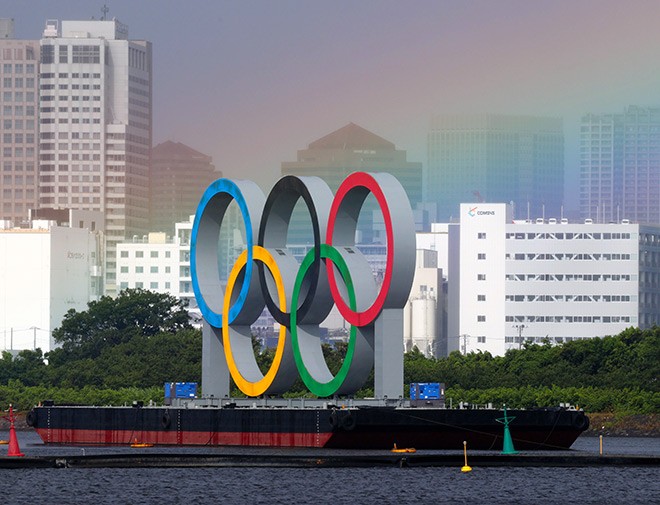 A rainbow is seen during a triathlon event on July 27 in Odaiba Marine Park in Tokyo’s Minato Ward. (Toshiyuki Hayashi)

A battle-weary doctor who has attended COVID-19 patients on the front lines at his hospital has found himself in an equally strenuous situation.

Masaharu Yagi, a 50-year-old doctor at Showa University Hospital’s Department of Emergency and Critical Care Medicine, is currently in charge of a Tokyo Olympic venue at the Odaiba Marine Park.

There, he not only has to be on the lookout for possible novel coronavirus infections, but he also must tend to spectators and athletes suffering from heatstroke and injuries, arrange ambulances and coordinate emergency care for any fallen competitor.

When he has time to catch his breath, he says he wonders why the Tokyo Olympics have to be held now.

Typhoon No. 8 added to his workload on July 27, when the Women’s Individual Triathlon event was held at the park in Tokyo’s Minato Ward.

Yagi was in charge of giving instructions to a team of around 20 doctors and nurses.

Although the typhoon did not directly hit Tokyo, its winds were strong enough to knock down athletes during the bicycle portion of the race.

Yagi’s team relayed information over the radio, such as where an accident occurred, which competitor was involved and whether the athlete was still conscious.

The team handled eight emergency cases on that day.

Yagi had arrived at the venue around 2 a.m. and went back to his hotel in the evening.

When he checked his smartphone for the latest daily count of new COVID-19 cases in Tokyo, he found that it had reached a then-record high of 2,848.

“As expected,” he said to himself.

Until July 20, Yagi had seen firsthand the effects and seriousness of COVID-19 at Showa University Hospital.

He responded to patients with high fevers, disorientation and symptoms of pneumonia, in addition to those injured in traffic accidents or suffering from heat-related illnesses.

Hospital staff wore gowns, masks, goggles, headcovers and gloves for protection against the virus, he said.

But they had to keep changing their protective gear to reduce the threat of contamination on their clothes.

While they were attending one patient, another one would arrive at the hospital, and staff were told, “Please see this patient, too.”

Yagi recalled one case in which an elderly man was found collapsed in a park and showing symptoms of pneumonia, a sign of COVID-19.

In another case, a man in his 40s became ill at home and was found by a colleague who was worried because he missed work without notice.

The man tested positive for the novel coronavirus and underwent tracheal intubation.

The number of COVID-19 cases at the hospital increased as the Olympics approached.

CALLED UP FOR OLYMPICS

It was in 2018 when the Tokyo 2020 organizing committee asked the hospital if Yagi could be assigned as a doctor in charge at an Olympic venue.

After the pandemic started spreading, Yagi had concerns about holding the Summer Games under such conditions, but he decided to cooperate, he said.

“If I decline, somebody else will go. Since I was appointed, I should go,” he said he thought.

Sections of the triathlon are held on public roads, and Yagi saw people packed on the sides of streets to watch the Olympians pass by.

He said he thought that the cheering would give a boost to the athletes, but he wished the spectators would keep quiet, maintain proper social distance and take measures to prevent heatstroke.

A top health official of the metropolitan government on July 27 denied any correlation between the Tokyo Olympics and the surge of new COVID-19 cases after the four-day weekend.

The record-high numbers “are people who were infected with the virus before the opening of the Olympics,” the official said. “I don’t think the Olympics have affected (the infection situation) very much.”

Yagi has a different opinion.

“The movement of people who are related to the Olympics started before the opening of the Games,” he said. “It is hard to deny the possibility that (the Olympics) have had an impact on the rising number of patients.

“The Olympics is a way too big of an event” he added. “I don’t believe the (organizers) can control the activities of the related people.”

Yagi said he has heard stories about people forced to shut down their restaurants and other businesses and reduce their living expenses because of income losses in the pandemic.

“I think (the Olympics) are important for athletes, but vaccinations have not really progressed. Weighing the gains from the Olympics against infection-prevention measures, why do the Olympics win?” he said on July 28.

Before the Olympics, Yagi said, he expected the number of daily infection cases in Tokyo to rise to 3,000 or so.