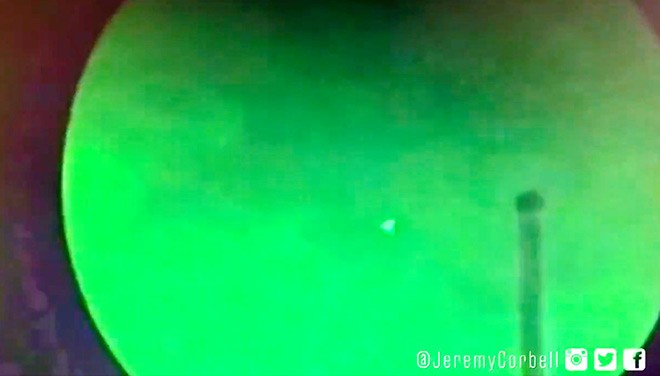 Though the U.S. government has released video and a report concerning unidentified flying objects, the Air Self-Defense Force and Japanese scholars are only slowly moving to catch up with research efforts in the West on the phenomena.

The official position of the Defense Ministry is that no eyewitness sighting of UFOs has yet been confirmed, but some of those connected with the ASDF admit seeing objects they could not identify.

A few years ago, a pilot of a surveillance plane was puzzled when the plane's infrared detection device found something making irregular movements.

“What is that?” a member of the radar crew asked.

The object was about 10 kilometers in front of the plane and was not only not visible to the naked eye, but also didn't show up on radar.

Less than a minute later, the object “disappeared” from the infrared detection device so the crew verbally reported they had lost sight of it.

No official report of the sighting was made by the plane crew.

In response to questions from The Asahi Shimbun, the pilot said, “I felt no one would believe us and so it was difficult to say we saw something. But there are a number of colleagues who claim to have seen similar objects.”

Other SDF members also said they had heard about similar experiences from their colleagues.

Gen. Shunji Izutsu, the ASDF chief of staff, revealed at a July news conference that 30 years ago a senior ASDF member told him about sighting a large object that remained stationary in the air.

“The fact that we are here does not mean we can deny intelligent life similar to us exists somewhere different and very far away,” Izutsu added.

After the U.S. Department of Defense released the videos last year, the SDF also compiled measures for dealing with similar encounters.

The objects in such encounters were defined as “any flying unidentified object that could have an effect on Japan’s defense and security.” The compiled measures stated that efforts should be made to photograph the object so that further analysis could be conducted.

But the measures, despite being quite broad, contain no specific steps to be taken should a UFO be spotted.

Ordinarily, ASDF jets are scrambled whenever a suspect plane is spotted near territorial airspace. The jets call on the plane to not enter Japanese airspace and if no response is received, one option is to fire warning shots.

But as there is no telling what a UFO might do in return, the most realistic response would be to leave the scene if an ASDF jet came under attack, an official in charge said.

The International Academy of Astronautics (IAA) in 1989 compiled a set of principles in the event that signals from extraterrestrial intelligence were detected.

The three major steps are to first verify and confirm with other researchers before actually announcing the detection; inform the United Nations secretary-general and other international organizations about the confirmation of detection of such signals; and release the findings to the world through the mass media.

But the principles were meant to deal with radio signals rather than actual encounters with UFOs.

Since the 1960s, research under the acronym of SETI, or Search for Extraterrestrial Intelligence, has been taking place around the world using radio telescopes.

SETI researchers in Japan met in 2009 to discuss how to proceed with their research, according to Shinya Narusawa, a senior researcher at the University of Hyogo Nishi-Harima Astronomical Laboratory.

One agreement reached should a signal be detected in Japan was to report the matter to the Cabinet Office, National Astronomical Observatory of Japan and the Science Council of Japan.

While researchers at a number of prominent Western universities are engaged in SETI research, there is no similar enthusiasm in Japan, given that many scholars do not want to spend their entire careers trying to detect extraterrestrial intelligence when the possibility of finding it is astronomically small.

Narusawa, however, said, “SETI is an opportunity to think about the future of humans living on Earth and is a journey in search of oneself.”

(This article was written by Yu Miyaji, Yoshitaka Ito and Kaigo Narisawa.)