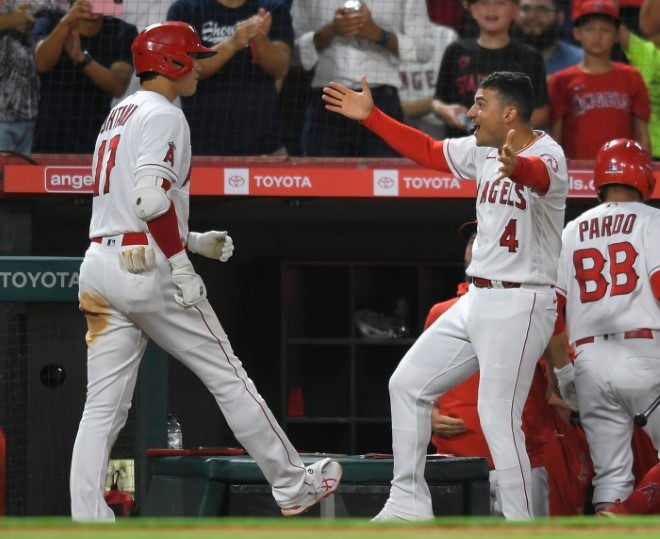 Los Angeles Angels’ Shohei Ohtani is congratulated by Josd Iglesias after hitting a three-run home run during the fourth inning of a baseball game against the Colorado Rockies on July 28 in Anaheim, Calif. (AP Photo)

ANAHEIM, Calif.--Shohei Ohtani continued his power display Wednesday, crushing a three-run home run, and Phil Gosselin had a go-ahead RBI single in the eighth inning for the Los Angeles Angels, who rallied for an 8-7 victory over the Colorado Rockies.

The Angels trailed early but used a five-run fourth inning to jump ahead 6-3 and added another run in the fifth for a 7-3 advantage. The Rockies rallied with three runs in the seventh and another in the eighth to tie the game at 7-all, but Gosselin’s RBI single in the bottom of the eighth scored David Fletcher to set the final margin.

Angels closer Raisel Iglesias (7-4) blew a save opportunity for the fifth time when he gave up a game-tying RBI single to Brendan Rodgers in the top of the eighth. He still earned the victory by recording five outs.

Ohtani’s line-drive blast to right field off Rockies reliever Jesus Tenoco was his MLB-leading 37th of the season and his third in the last four games, including consecutive contests against the Rockies. It gave the Angels a 4-3 lead in the fourth.

Trailing 7-3, the Rockies rallied with three runs in the seventh inning on a two-run double from Ramiel Tapia, while Tapia scored on a Fletcher throwing error when the Angels failed to turn a double play.

Tapia had three hits for Colorado, while Trevor Story had a two-run home run in the first inning. Playing amid constant rumors as the trade deadline approaches, Story hit his 13th home run of the season, two days after he was hit on the back of the left-hand by a 97-mph fastball from Ohtani.

Tinoco gave up five runs on five hits and one walk in 1 1/3 innings of work as the Rockies were forced into a bullpen game after scheduled starter Chi Chi Gonzalez was placed on the COVID-19 injured list earlier in the day. Carlos Estevez (2-3) gave up the Angels’ run in the ninth.