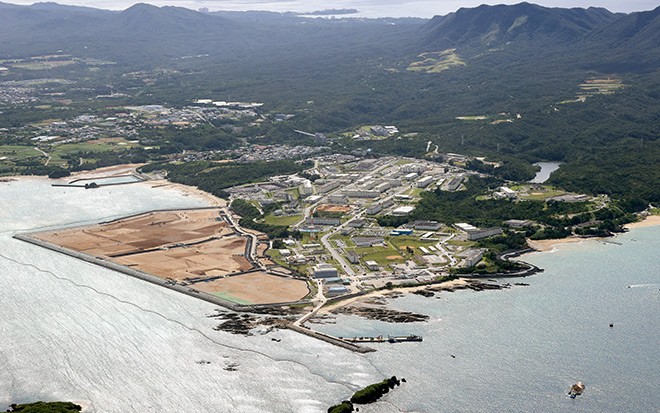 The planned construction site in Nago, Okinawa Prefecture, on July 15 for a military base to relocate U.S. Marine Corps Air Station Futenma in Ginowan, also in the prefecture. A soft seabed was found in the right side of the photo. (Eiji Hori)

NAHA--Okinawa Prefecture announced on July 28 the issuance of a conditional permit for the Defense Ministry to transplant about 40,000 colonies of coral from waters near the construction site for a planned U.S. base.

The central government intends to reclaim land in waters off the Henoko district of Nago in its controversial plan to build a new U.S. base there that will assume the functions of U.S. Marine Corps Air Station Futenma in Ginowan. Both Nago and Ginowan are located in Okinawa Prefecture.

Under the plan, some 75,000 colonies of coral near the site will need to be moved for their protection.

The ministry’s Okinawa Defense Bureau asked the prefecture in 2019 to allow it to transplant 40,000 of the colonies out of the construction area so it could proceed with the landfill project.

But Okinawa Governor Denny Tamaki, who opposes the construction of the new base, did not respond to the bureau’s request, prompting the central government to order the governor to approve it.

The prefecture then sued the state, claiming that the order is illegal. But the Supreme Court rejected the plaintiff’s claim on July 6.

“We can’t help but feel frustrated. But the local government needs to respect the court’s ruling and law in its administration,” Tamaki said of his prefecture’s permit on the coral transplant.

The prefecture issued the permit provided that the ministry complies with certain conditions, such as reporting progress on the work to move the coral out of the construction site about once a week and providing photos of the area.

The permit is a step forward for the central government in proceeding with the reclamation work, but that is not the only thing that stands in its way.

The government submitted a request in April 2020 to Okinawa Prefecture for a change to the reclamation plan due to a soft seabed off Henoko, which needs to be shored up for the project to continue. The seabed lies in an area of about 111 hectares, or 75 percent of the planned reclamation site, on the northern side of Henoko.

The central government cannot begin the landfill work at the northern part of the district unless the prefecture approves the request.

Tamaki said his prefecture is thoroughly examining the request, adding that it could revoke the permit on the coral transplant if it becomes impossible to complete the entire reclamation project.

He urged the central government to respond to his prefecture’s call for dialogue.