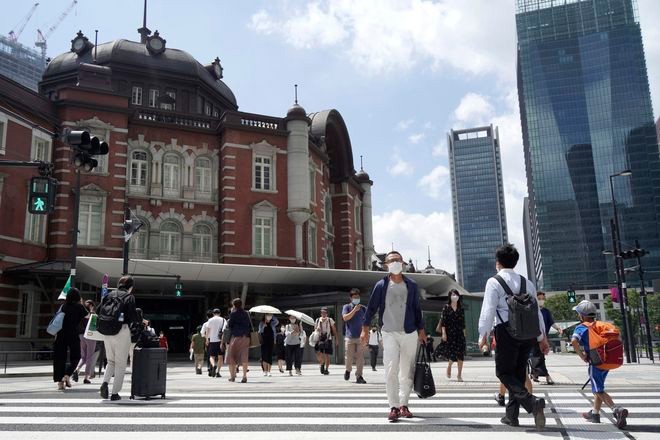 People walk across a crossing near Tokyo Station in Tokyo on July 29, a day that record-high coronavirus cases were found in the Olympics host city. (AP Photo)

With the Tokyo Olympics taking up the national spotlight as Japan’s medal count rises, the nation, its capital and the Games themselves were hit with record numbers of new COVID-19 cases on July 29.

The number of new novel coronavirus infections in Japan surpassed 10,000 for the first time.

The metropolitan government confirmed an all-time high of 3,865 infections. It topped the previous day’s 3,177 cases, marking its third consecutive day of smashing that record.

It was also a record-making day for the organizers of the Tokyo Olympics.

The Organizing Committee of Tokyo Olympic and Paralympic Games confirmed that 24 accredited people tested positive for the novel coronavirus, the highest since the committee started announcing a daily count of infection cases.

Three of the 24 are athletes, while 15 are contractors, the committee said.

Seven of them are people related to the Games and came from abroad. Seventeen are those who live in Japan, according to the committee.

A total of 193 people related to the Games have contracted the virus.

According to Tokyo metropolitan government officials, the seven-day average of new cases in the capital reached a record high of 2,224.1 on July 29, up 61.9 percent from the figure a week ago.

The previous high was 1,954.7, which was recorded the day before.

Infections are surging elsewhere in Japan as well.

Okinawa Prefecture meanwhile confirmed a record 392 new cases on July 29. The number of new cases per 100,000 people over the past week was 94.46 for the southern island prefecture, second only to Tokyo.

At a July 29 meeting of a panel that monitors the infection situation for the Tokyo metropolitan government, officials estimated that the weekly average of new infections per day will reach 4,532 on Aug. 11.