In fast-warming world, Tokyo is barometer for future Olympics 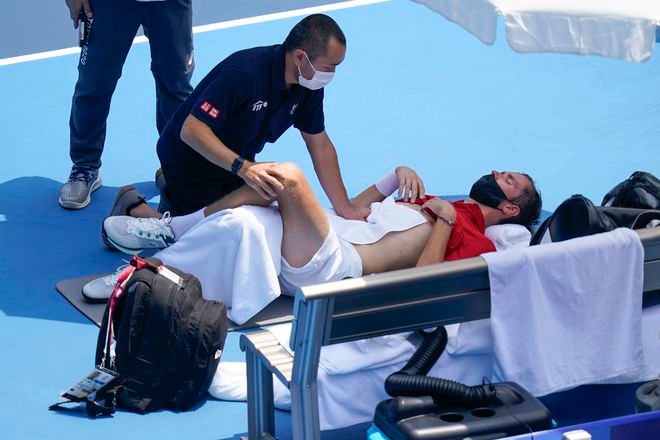 Daniil Medvedev, of the Russian Olympic Committee, is tended to during a third round men's tennis match against Fabio Fognini, of Italy, at the 2020 Summer Olympics on July 28 in Tokyo. (AP Photo)

Thomson Reuters Foundation--The muggy heat swaddling Tokyo may be a forerunner of Olympic life to come, experts say, urging a rethink to make the world's oldest sporting spectacular fit for a fast-warming planet.

The Olympics kicked off in the Japanese capital last week after a year-long delay due to the pandemic, with organisers banning spectators from venues and enforcing a slew of measures to keep the coronavirus at bay.

While worries over COVID-19 have overshadowed other concerns, Japan's heat and humidity - where temperatures can exceed 35 degrees Celsius (95°F) - also show how future Games will need to grapple with extremes as climate change bites.

"Tokyo 2020 will serve as a model for future hotter Olympics and other summer sporting competitions," said Yuri Hosokawa, an expert on sport and heat risks at Japan's Waseda University.

"Leading up to the Games, many athletes around the world have trained under humid heat to acclimatise their body to the environmental stress they will experience in Tokyo," she told the Thomson Reuters Foundation.

Tokyo's mean annual temperature has risen by 2.86C since 1900, about three times as fast as the world average of 0.96C, says the British Association for Sustainable Sport.

Hosokawa said some new heat mitigation measures, such as on-site medical treatment for serious heat stroke, instigated for Tokyo, could help shape how best to compete in oppressive heat.

The Tokyo Games, from July 23 to Aug. 8, coincide with the year's hottest temperatures in Japan.

Just last Friday, a Russian archer fainted in the heat during a qualifying Olympic round.

On Wednesday, tennis world No. 2 Daniil Medvedev said a player "can die" in the heat that is stifling Tokyo. The sports' governing body later agreed to delay match start times in response to similar complaints by other players.

'HEAT ON THE AGENDA'

Hoping to beat the heat, organisers have deployed a host of tools - from mist-spraying stations to cooling vests - as well as handing out salt tablets and ice cream to weary volunteers.

The city, known as an innovation hub, has also deployed tech to help mitigate man-made change: be it roads that reflect heat or pavements that absorb water to stay cool, while moving the marathon and race-walk events to the cooler north.

But climate researchers urged the Olympics authorities to think way further out and change the shape of future summer Games, either by shifting events to cooler seasons, building in more breaks or changing running orders for the fierce weather.

"They have to start putting heat on the agenda. They're going to have to start thinking about the best time of the year and the best locations to have these events," said Mike Tipton from Britain's University of Portsmouth.

Tipton, a professor of human and applied physiology, said the heat was not only diminishing the elite competitors' performance but also posed grave health risks.

"People who follow sport should appreciate what climate change is doing to their sport, entertainment and spectacle. You just won't have people performing at the same level, in endurance events for example," he added.

Makoto Yokohari, an advisor to the Tokyo Olympics, said high-tech measures, such as the heat-blocking pavements, could only have "limited" effects and it would be better to postpone.

"When it comes to this combination between the temperature and the humidity, I have been warning that Tokyo is the worst in Olympic history," said Yokohari, a professor on green urban planning at the University of Tokyo.

Yokohari, who has analysed data back to the 1984 Olympics in Los Angeles, urged the organisers of the next summer Olympics - Paris in 2024 - to act early and address potential challenges.

France saw record heatwaves in 2019, with temperature jumping to a high of 46C, causing about 1,500 deaths.

"If that happens again... then I'm sure the situation in Paris (2024) will become even worse than Tokyo," said Yokohari.

Possible measures: using shade for outdoor events or holding the marathon at midnight when temperatures dip, he added.

The International Olympic Committee said in emailed comments that it would take into account "flexibility and adaptation to the consequences of climate change" in planning future events.

"A wide range of measures" are being taken by Tokyo to mitigate the heat, it added, such as moving locations for the marathon and shifting start times for others.

Hosokawa of Waseda University cautioned that delaying the summer Games to cooler seasons may not work as events such as the triathlon and beach volleyball are made for summer.

In future, she said, international sports federations would need to agree on what environmental conditions would lead to automatic cancellation of events or races.

"By knowing the upper threshold, athletes, spectators and stakeholders can train and plan accordingly and share the same expectations," she added.