Young people told to get shots that are largely unavailable 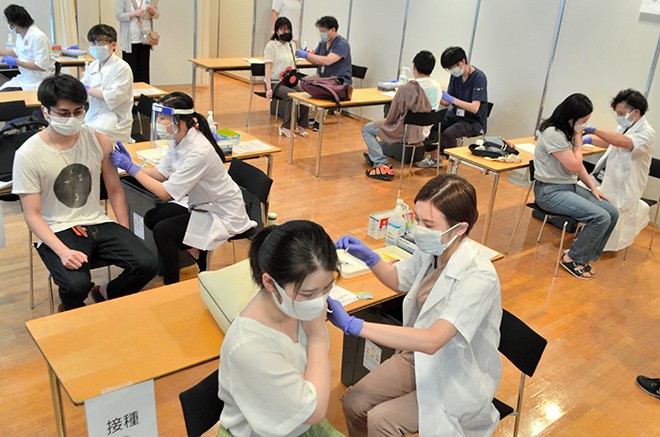 Nihon University students receive COVID-19 shots at one of 15 locations set up by the institution within Tokyo. (Yukihito Takahama)

Tokyo Governor Yuriko Koike’s calls for young people to get vaccinated against COVID-19 have exacerbated frustrations over the shortages of doses in the capital.

Tokyo keeps setting daily records for the number of newly confirmed infections, and a growing percentage of the new patients are in the younger age groups.

Koike has been urging young people to help stem the increase by getting vaccinated.

A 34-year-old company employee in Kokubunji, western Tokyo, was flabbergasted by Koike’s remarks. He said he would surely comply, if he could.

“To say ‘get vaccinated’ when there are no vaccines available shows that she has no understanding of the situation at the local level,” the man said.

The Kokubunji city government has been inoculating its residents from the oldest age groups, and it has not yet gotten around to vaccinating those 39 and younger.

A 27-year-old employee residing in Tokyo’s Setagaya Ward agreed with the message that Koike was trying to get across, but the lack of vaccines has made fulfilling her request difficult.

He received a vaccine voucher from the ward government about 10 days ago, but reservations have already been filled.

A 28-year-old company employee living in Meguro Ward has already been told by his family living in Saitama Prefecture not to bother returning to the family home for the Bon holidays in August.

However, the man is one of the lucky ones. He made a reservation for a vaccine shot in early August through his workplace.

Moreover, his wife also received a vaccine ticket for spouses from her workplace, so technically the man can get four doses.

The situation made the man think that “vaccines are not going to where they are needed.”

Given the increase in younger people being infected, local governments in Tokyo have switched to inoculating residents in lower age groups, but the lack of vaccines has hampered their efforts.

For example, the Shinjuku Ward government has placed priority on getting residents in their 20s and 30s vaccinated, and it began taking reservations on July 7.

But with not enough doses to go around, only 14 percent of residents in those two age groups had received their first dose as of July 27.

The ward government is still seeking to inoculate all residents by the end of November.

“We will not reach that goal at the current rate, but there is nothing we can do since there are no vaccines” said one official handling vaccinations in the ward.

The Suginami Ward government has implemented a similar measure for its residents aged between 12 and 39. But of the 180,000 or so in that age bracket, only about 95,000 have been jabbed so far.

Reservations for the 170,000 or so Suginami residents between 40 and 59 began on July 14, but with only enough doses for 20,000 residents, all available slots were filled in about two hours.

The Setagaya Ward government, also facing a major shortage of vaccines, has turned to the Rakuten Inc. group, which is headquartered in the ward, for a cooperative effort.

Rakuten has started a vaccination program for its employees, and under the new arrangement, Setagaya residents 18 and older can also get their shots there.

However, the program will still not completely cover the shortage of vaccines.